The power of touch: Skin-to-skin benefits babies up to 20 YEARS later a study has found

If you have ever had people tell you how you are spoiling your baby by holding him too much – here is you permission to shove this in their faces.

Not only are cuddles with mum or dad good for bonding, soothes baby, reminds you all to slow down, etc. etc. But, a more recent study has also shown that the perks of all this touch and skin-and-skin contact actually last long after baby is big enough to run and play on her own – in fact, all the way into adulthood.

According to a study published in the journal Pediatrics, when parents practiced “Kangaroo Mother Care” with their premature babies, the little ones went on to perform better in school, register higher IQs and have preferable behavioural outcomes—even 20 years later.

For the study, researchers followed up with 441 young adults who had participated in a mother-infant bonding trial when they were premature newborns. The researchers found that the young adults of parents who practised Kangaroo Mother Care (KMC) had “reduced school absenteeism and reduced hyperactivity, aggressiveness, externalization, and socio-deviant conduct of young adults.”

And look, it's important to note that although it’s called “Kangaroo Mother Care,” fathers are also able to do it, which the researchers say creates better paternal bonding.

The researchers discovered via neuroimaging that the young adults who benefitted from skin-to-skin time as babies had larger areas of grey matter in their brains, which is know to promote processing. 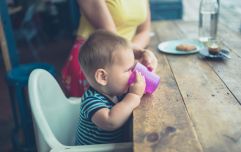 Love the convenience of baby food pouches? Here's why experts say you might need to rethink that

END_OF_DOCUMENT_TOKEN_TO_BE_REPLACED

Another really key find from the study is that the benefits weren't only seen in the children. The researchers also discovered that the parents who practised KMC were also more protective and nurturing in comparison to parents from the sample group that didn’t do KMC.

This, the study authors speculate, is because “KMC seems to motivate families to become more child-oriented.”

“This study indicates that KMC had significant, long-lasting social and behavioral protective effects 20 years after the intervention... We hypothesize that the results would be even more significant if KMC was introduced as soon as the infant could tolerate it, even in ICUs. This new knowledge must be used to extend KMC coverage to the 18 million preterm and LBWI born each year, who are candidates for KMC. We firmly believe that this is a powerful, efficient, scientifically based health intervention that can be used in all settings.”


popular
40 gorgeous baby names predicted to be trending in the next decade
Stacey Solomon was trolled for her boys having three different dads – and here is her response
This Diet Can Lead To Weight Loss AND Sharpen Your Brain (We Are All Over It)
Netflix announces new true crime documentary series: The Vanishing At The Cecil Hotel
Anna Daly launches her cosy chic lifestyle brand, Little Bliss
Jewellery made from breastmilk might sounds nuts – but look how pretty it is
10 cute Irish baby names that are not yet too popular (but will be soon, we think)
You may also like
3 days ago
Enjoy your coffee, mums – unsupervised playtime is the best thing you can do for your child
5 days ago
Ireland's only breast milk bank is running low as a result of the pandemic and needs more donors
5 days ago
Aunts are 'as important as mums' when it comes to raising girls says parenting expert
1 week ago
Turns out, having a sister can actually help make you a better person
1 week ago
A paramedic has shared a simple hack to check for toddler choking hazards
2 weeks ago
Study finds taking antibiotics while pregnant can weaken baby's immune system
Next Page