"It meant everything to have him there in my own special way."

A bride has fulfilled her father's dying wish of walking her down the aisle by having his ashes put in her nails for her wedding.

Charlotte Walton was able to tie the knot with her dad Mick close to her after losing him to prostate cancer in April.

"I was always a huge daddy’s girl," she told Unilad.

"I was heartbroken when he lost his battle because I knew how much he wanted to see us marry, I wanted him to be there but it wasn’t meant to be."

Charlotte was determined to include him in her wedding so she turned to her cousin Kristy, a nail technician. They came up with the idea of putting his ashes into Charlotte's acrylic nails for her big day.

Kristy took bone fragments from the ashes and attached them to the tips of the nails – check out how she did this in a Youtube video here. 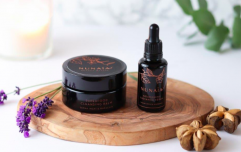 Soil to skin: The Irish superfood skincare line putting sustainability at the helm

END_OF_DOCUMENT_TOKEN_TO_BE_REPLACED

Charlotte said it felt like her dad was holding her hand as she married her partner Nick.

"I knew it wasn’t the same as him really being there, but it was as close as we could get," she said.

"It meant everything to have him there in my own special way, I married Nick, who I have two children with and I know Dad will always be watching over us."


popular
The 30 baby names that are going to be super popular in 10 years time
Lockdown babies: Parents are opting for some very unique pandemic baby names
Kourtney Kardashian admits bed-sharing is her secret to getting enough sleep
Unstructured play is vital for kids, so we need to stop entertaining them
Summer reading: 10 seriously great books to pack in your staycation suitcase
Tale as old as time - twelve baby girl names inspired by literature
14 super sweet and short Icelandic names perfect for baby girls
You may also like
1 week ago
The skin-brightening DIY mango facemask that'll leave your skin glowing
1 week ago
3 AMAZING beauty buys that'll give you that gorgeous summer glow (no sun needed)
1 week ago
6 steps for treating acne in adulthood, according to a skin therapist
2 weeks ago
Victoria Beckham reveals what she eats every day for perfect, flawless skin
2 weeks ago
One mum's inspirational 'stretch marks' Instagram post is exactly what we needed to see this summer
2 weeks ago
At home self-care: Arnotts reveal 25 new brands to their online beauty and wellness hub
Next Page