Nick Cannon, who has 4 baby mamas, says his favourite is "the next one"

"I don't think that was a good answer."

Nick Cannon has been making headlines all year since welcoming four babies in the space of seven months.

It doesn't look like talk about his fathering of seven kids by four different women is going to die down anytime soon, either.

In a clip from Wednesday's episode of his self-titled daytime TV show, the 41-year-old sat down for a game of 'Plead the Fifth' with Andy Cohen.

Now, if you've seen a single episode of a Real Housewives reunion – or the Keeping Up with the Kardashians reunion, for that matter – you'll know Andy isn't one to shy away from asking his interviewees questions they might not want to answer.

You'd think, then, that someone being asked about the four mothers of their children would jump at the chance to plead the fifth and avoid the question, right?

Wrong, it turns out, if that someone is Nick Cannon.

"Who is your favourite baby mama?" Andy asked the dad-of-seven on his turn. 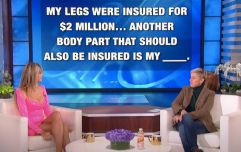 Heidi Klum reveals her legs were insured for $2 million

END_OF_DOCUMENT_TOKEN_TO_BE_REPLACED

As Nick appeared to debate answering, the studio audience began to chant "plead the fifth."

If only he'd have listened.

The audience oohed and ahhed as Andy pressed, "We know there are a few..."

"My favourite baby mama is the next one," Nick answered as Andy looked shocked.

"I don't think that was a good answer," Andy replied.

Nick previously opened up about not "subscribing" to the idea of monogamy, saying that it wasn't his idea to have seven kids by four different women.

"Those women and all women are the ones that open themselves up to say, 'I would like to allow this man in my world and I will birth this child,'" he told Power 105.1's The Breakfast Club. "So it ain't my decision, I'm just following suit."


popular
Woman's suitcase and bank cards stolen as she gives birth in Dublin hospital
Antigen tests sold in Dunnes and Lidl recalled over false positives
Gardaí concerned for welfare of missing 14-year-old Dublin girl
Teen who pushed girl under Dart to face trial in adult court
Here are the Covid restrictions that may be lifted as early as next week
5 family members, including parents, sentenced over sexual abuse of children
€1,000 bonus will be given to healthcare staff who worked in Covid exposed environments
You may also like
1 day ago
Cardi B says she's "close" to tattooing her son's name on her face
2 days ago
Kanye West holds his own party for Chicago after claiming he wasn't invited to Kim's
3 days ago
David Beckham is criticised for kissing daughter Harper on the lips – again
5 days ago
Britney claims Jamie Lynn's memoir is at her expense: "She never had to work for anything"
5 days ago
John Mulaney's ex-wife Anna Marie Tendler opens up about "surreal" Olivia Munn baby news
6 days ago
Jamie Lynn Spears cries over Britney rift: "I don't know why we're in this position right now"
Next Page