Tributes have been paid to a man who tragically died after he fell near Ireland's tallest waterfall in Sligo.

Named locally as Anthony Doorhy from Loughrea in Galway, he was on a trip to Glencar when he fell 20 metres from a walkway at the Devil's Chimney waterfall.

It is also believed that Anthony became disorientated while he was walking before tragedy struck when he slipped and fell into a stream.

A major search and rescue operation went underway when he was reported missing, with Sligo Leitrim Mountain Rescue receiving a call at around 7 pm to say his body had been located and he was pronounced dead at the scene.

As tributes come in, Anthony's RIP.ie death notice says that he will be deeply missed by his partner Marcela, daughters Carmel and Yvonne, and their mum Ann, sons-in-law Michael and Richie, grandchildren Richie and Ryan, brother Willie, sisters Nora, Delia and Mary, nieces, nephews, extended family, relatives, neighbours, and friends.

He will repose at Dignity Funeral Care, Funeral Home, Barrack Street, Loughrea on Friday, August 5th from 5 pm to 7 pm.

Taking to social media after news broke of his passing, many posted their condolences, with one saying: "Deepest condolences to all family and friends at this time. Thank you to mountain rescue and our helicopter crew for their endless hard work.” 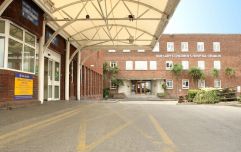 END_OF_DOCUMENT_TOKEN_TO_BE_REPLACED

Another wrote: "RIP. Sincere sympathy to his family. An unexpected tragedy. Well done to paramedics and all who helped at the scene of the accident.”

A third said: "Thoughts are with his family. Awful tragedy.”

Speaking to the Irish Mirror, Cathaoirleach of Sligo County Council Michael Clarke said: "I’d like to offer my deepest sympathies to the family of the deceased man. It’s an awful tragedy and so sad that he was apparently on his holidays in the area.

“The area is not associated with tragedy and I believe this may have been the first fatality at the Devil’s Chimney. It’s a tragedy and people are in shock.”