Charlotte Crosby has revealed the gender of her baby.

Earlier this year, the reality star confirmed she was pregnant with her first child.

Charlotte Crosby has now revealed that she is expecting a baby girl.

She shared, "To our little girlie, You're so precious to us already."

"My shining little star. The world is yours for the taking," the mum said.

She added, "Words can not describe how excited we are to meet you, little superstar."

"A little girl can you all believe it," Charlotte added. 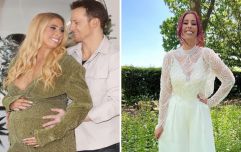 END_OF_DOCUMENT_TOKEN_TO_BE_REPLACED

She said, "I'm just so pleased it's a girl, she always gets what she wants!"

Over the weekend, Charlotte hosted a gender reveal party.

Charlotte's nearest and dearest joined her at the celebration this weekend.

The Geordie Shore star revealed she was pregnant in April.

"I couldn’t be happier to be sharing it with you all……I'm having a baby."

The reality star said she feared she wouldn't be able to get pregnant after suffering an ectopic pregnancy in 2016.

She had her left fallopian tube removed after experiencing severe pain and bleeding.

The mum-to-be admitted she couldn't believe she was pregnant after fearing she would never be able to conceive.

popular
Babies born in February have some pretty cool advantages – no, really – it's true
11 of the best fun playgrounds in Dublin
'He's a changed man': Woman marries her 'high school bully'
'Vile' TikToker blasted for comparing disabled kids to vegetables
26 Amazing Irish Glamping Sites for Your Family Staycation
Entrepreneur schoolboy has made £1,000 from selling sweets
We have St. Brigid to thank for our new bank holiday, but who exactly was she?
You may also like
2 months ago
Fair City star Jenny Dixon shares her twins' gender in sweet video
4 months ago
Has Molly Mae Hague accidentally revealed her baby's gender?
7 months ago
Mum slates parents-to-be for hosting gender reveal parties
8 months ago
Man gets mixed reaction for booing at his friend's gender neutral gender reveal
8 months ago
Excuse me? This mum-to-be is charging her friends $20 to attend gender reveal
8 months ago
Downton Abbey's Allen Leech reveals second child's gender in the cutest way
Next Page