Did you catch this embarrassing moment on First Dates Ireland last night?

This was just so, so awkward.

We've all had a few bad dates in our time, however this ending has to be one of the most cringey things we have ever seen.

On the show, it seems like Siobhan from Youghal isn't all that interested in her match, Aidan from Tralee. They just don't seem to be getting on too well and it's mighty awkward.

Fast forward to the post-date interview though, and Aidan goes on about how he wouldn't go on another date with Siobhan because he thinks she doesn't like him.

He said he thinks that he is not what she's looking for... which, fair. 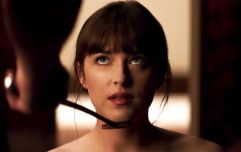 Staying in? RTÉ is showing the very steamy 50 Shades of Grey tonight

END_OF_DOCUMENT_TOKEN_TO_BE_REPLACED

However, then things take a turn when Siobhan actually reveals that she said yes, she would have went on a second date with him.

It was just all over the place, tbh. Have a look at the video above, and cringe.


popular
Expert says Cocomelon acts "as a drug" to kids' brains
"I tried to bring her back": Santina Cawley's mother speaks out about daughter's murder
Another 7 possible cases of unknown hepatitis strain under investigation in Ireland
DIY: How to transform your old trampoline into a super-cosy 'summer hideout'
4 ways to fix hard slime with ingredients you probably already have at home
Princess Charlotte doesn't have to bow to the Queen but Prince George does - here's why
Karen Harrington found guilty of murdering toddler Santina Cawley
You may also like
2 years ago
WATCH: Meet 88-year-old 'Paddy Christmas' who has become a local hero for his festive lights
2 years ago
David Attenborough has just confirmed a brand new nature series for 2021
2 years ago
Sky's Christmas advert has people in tears as it stars E.T and Elliot 37 years on
2 years ago
I've ranked every Modern Love episode from best to worst for your viewing pleasure
2 years ago
WATCH: Dogs Trust release Christmas advert and it's important viewing for everyone
2 years ago
Disney announces new Pixar movie 'Soul' set for release in summer 2020
Next Page