Burglar broke into Victoria and David Beckham's home while they slept

The Beckhams are badly shaken after the robbery.

David and Victoria Beckham are reportedly shaken after a masked man broke into their London home.

The couple and their 10-year-old daughter were asleep when the burglary happened.

The thief made their way into the couple's home in Holland Park, West London through an upstairs bedroom.

Cruz Beckham discovered their home was robbed when he returned from a night out with his friends.

He returned home shortly after midnight.

A window of their $40 million London home was broken and a spare bedroom was ransacked.

The thief stole thousands of pounds worth of designer clothes and electric goods.

Cruz woke his dad when he made the discovery, but the burglar had already fled the scene. 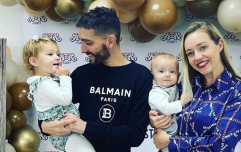 Kelsey speaks out about moving on after Tom Parker's harrowing death

END_OF_DOCUMENT_TOKEN_TO_BE_REPLACED

David and Cruz then searched their home, while Victoria stayed with 10-year-old Harper.

It is believed the family is badly shaken after the break-in.

Police have now launched an investigation into the robbery.

A source told The Sun, "Sadly the Beckhams were the victims of some fairly professional thieves who have been operating in the area."

“Fortunately the criminals only made it as far as one-bedroom before they ran off.”

“The thieves had broken through a window and darted straight back out of the same one with a small number of items. Luckily none had a huge amount of sentimental value to the family.”

The news comes after a woman was charged with stalking David Beckham and his family.

She was also spotted outside Harper's school, pretending to be a parent.

The woman also went to Beckham's West London home, but can no longer be within 500m of any of Beckham's properties.

popular
Irish dad shares warning after his 12-week-old baby was hospitalised with RSV
9-year-old boy will "never be the same again" after Wexford dog attack
7 Christmas markets and Santa experiences to visit with kids this winter
There's a FREE Santa experience happening in Dublin
"I want to spend all my time with them": Vogue Williams on suffering from mum guilt
Warning issued to Irish parents after increase in RSV cases
Olivia Wilde wanted to work through issues with Harry Styles
You may also like
1 week ago
New mum Rebel Wilson slated for going on night out
3 weeks ago
Nick Carter shares tribute following death of his brother Aaron
1 month ago
Nicky Byrne pens moving birthday tribute to his daughter
1 month ago
"I'm very single": Una Healy says you don't need a partner to be validated
1 month ago
James Argent (34) called out for dating 18-year-old girl
1 month ago
James Corden apologises after mistreating restaurant staff
Next Page