A gin parlour with 500 varieties of everyone's current favourite tipple.

There's no denying the popularity of gin in recent times and although some people might be over the craze, it's still a very big deal in Galway.

So much so that Hyde, a new bar in the city centre, is opening on April 27 and we have a feeling it's going to be a huge hit with both locals and tourists.

It sounds like the City of the Tribes might be just the spot for a little staycation with the girls or even a rare romantic break with your other half.

When you get a delivery it's always exciting. When that delivery is our gin bible it's even more exciting #Gin

There's Unicorn Gin on offer and the house pour at Hyde is going to be Bombay Sapphire with Fever Tree tonic.

There's also a 'flower wall' containing over 7,500 flowers which will be the focal point of Hyde and again, you'll be seeing a lot of that on social media.

Our flower wall is almost there. Now for the install next week. #ComingSoon #Galway #Flower 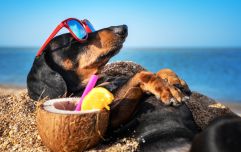 END_OF_DOCUMENT_TOKEN_TO_BE_REPLACED

The whole venue sounds like Instagram perfection with graffiti artist Kathrina Ruperit designing the striking murals which adorn the walls of the city's newest bar.

Hyde wants to do things a little differently and their Gin Bible is sure to be a huge hit, explaining the extensive list of gins and the country each one originates from.

If you're not into gin, fear not because there's also a cocktail menu, local craft beers and Japanese beer on draft.

popular
Hilary Swank, 48, reveals she is pregnant with twins
Kelly Clarkson admitted she spanks her children if they misbehave
Today FM's Paula MacSweeney welcomes baby boy
Rebekah Vardy asks Coleen Rooney to give legal fees to charity
5 reasons having a son is the best (even if you were hoping for a girl)
Expert says Cocomelon acts "as a drug" to kids' brains
Rick Stein's next level recipe will ensure your little ones will never say no to vegetable soup
You may also like
1 year ago
You can now get a Fleabag themed gin
1 year ago
Suffering from hayfever? Gin and tonics can reportedly help
1 year ago
Pasta with gin sauce is a thing apparently – and honestly, it sounds SO good
2 years ago
PSA: You can now rent a pop-up gin bar to your Dublin gaff
2 years ago
Hurry up summer! Gordon's Gin launches a new white peach flavour
3 years ago
A gin-infused rosé exists and we need to try it immediately
Next Page