Grace Mongey responds to people who called her a terrible mother

"I’ve stayed quiet for too long"

The worst thing about social media is how easy it is for trolls to send woeful and cruel messages to people.

When you have a huge following, you're left exposed and can often be targeted by these people.

They'll send the nastiest and lowest messages and people often say it should just be accepted. It's part of social media, but Grace Mongey, better known as Faces by Grace, isn't standing for it anymore.

The influencer has called out those who have been sending her harmful messages. Grace revealed people have been commenting on her appearance and even called her a "terrible mother".

"Since when did we become so toxic? Over the last week, I’ve had to read horrendous comments about myself, some saying awful things like I’m so depressed, a terrible mother & fat-shaming me."

"If a man was to go on a retreat to invest in his well-being would you shame him? I think not, he’d be told how wonderful & admirable it was and not told he’s a terrible father." 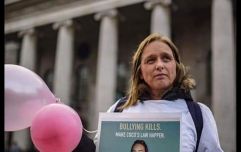 END_OF_DOCUMENT_TOKEN_TO_BE_REPLACED

The mum shared, "I’ve stayed quiet for too long about the negativity I receive but it was only in this last week, talking to supportive women that I realised I don’t need to stand for this.

"I know and I don’t need to justify or prove what a f***ing amazing mother I am but what I do need to do is tell you it’s not ok to criticise, judge, or shame mothers."

"Think before you type and try your best to be cheerleaders not trolls," she advised.

We couldn't agree with Grace more. There's enough negativity going around as it is. Kindness doesn't cost you a penny.

popular
Bachelor Nation star Sarah Herron's baby passes away shortly after birth
Molly Mae fans are shocked after finding out how much Bambi's crib cost
Tommy Fury responds to Jake Paul ruining his baby news
Dad asks public to forgive his wife after she killed their three children
Dani Dyer reveals the gender of her twin babies
Man charged with the murder of pregnant Natalie McNally
The baby names on the brink of extinction this year
You may also like
9 months ago
The Mothership: What to do if your child is being bullied
1 year ago
Staying safe online: 10 tips about internet safety every parent needs to know
3 years ago
People are sharing their experiences of bullying in the wake of Jesy Nelson's documentary
5 years ago
Girl shares upsetting messages to mum after being cyber-bullied
5 years ago
Dad asks daughter's cyber bullies to come to her funeral
5 years ago
New law could fine parents who give kids unlimited internet access
Next Page