The highest ever number of children and families turned to Barnardos for support in 2017.

Last year saw over 15,3000 cases seek help from the charity, making this a record number of people aided by Barnardos over the course of one year.

According to Barnardos' annual report, almost half (44 percent) of children who needed support were aged between six and 12-years-old with 35 percent being five-years-old and under.

The charity provide educational services and assistance for children living with social or economic disadvantages.

Barnardos has 40 centres across the country and also operate in family's homes, schools, and other community areas.

Over the past 10 years, they have provided assistance to 86,585 children and families in Ireland. 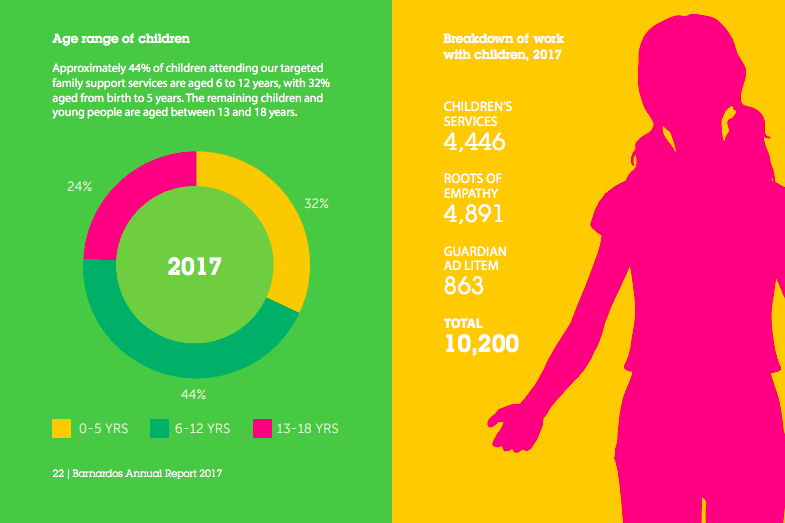 The charity's outgoing CEO Fergus Finlay has called on the government to tackle child poverty in next months budget.

He told Morning Ireland that some of the the stories he had seen over his years of working with Barnardos were "heartbreaking."

"What I have also seen however, is unwavering dedication to the children and the families we work with, and a drive to provide the best opportunities and possibilities for the children in our care."

Finlay also said that the numbers of young people experiencing child poverty has risen "by thousands" over the past few years.

He urged that more investments be made in areas like early years education.


popular
6 vey weird pregnancy tests from olden times
"I never really appreciated how hair makes me feel" Roz Purcell shares her struggle with hair loss
Are you the middle child? It could mean that you're the best friend to have
You know you're breastfeeding a toddler when....
Hospital bag essential - mum shares 'Pad-sicles' hack all expectant mums need
Can you pronouce these 7 'unique' baby names? They're trickier than you think
A letter to my children's teachers – on the last day of school
You may also like
3 days ago
"I was petrified and wanted a hand to hold:" Irish women call for the ease of maternity restrictions
5 days ago
Socially distant Santa: There is a drive-in Santa experience happening in Dublin this festive season
5 days ago
Take part in HB Ice Cream Sunday tomorrow – in support of Down Syndrome Ireland
6 days ago
"Many will be upset..." Dublin to move to Level 3 from midnight, Taoiseach confirms
1 week ago
Covid-19: Dublin likely to move to Level 3 restrictions before this weekend
1 week ago
Irish casting agency have put out a casting call for male babies and toddlers
Next Page