Daniel O'Donnell was hilarious on Room to Improve last night

After months and months of waiting, it finally happened.

We were excited, enthralled, and simply desperate to know how it would all go down.

There were rumours, falsities, and fake news leading up to television event of the year that everybody had been talking about... and that nobody wanted to miss.

And then last night, the people of Ireland finally got what they'd been waiting so long for - the Daniel and Majella episode of Room To Improve.

And oh, it did not disappoint.

Nobody better ever say again that RTE can’t do comedy. #roomtoimprove

The nation was excited.

Even Dermot Bannon was excited as he shared a photo of some beautiful Daniel and Dermot cupcakes before things kicked off.

Unsurprisingly, things got off to a great start.

There were some beautiful shots of the Donegal countryside that are sure to boost tourism by at least 60 percent, Daniel and Dermot having a bit of banter, and Daniel's desire to have about 27 ensuites included in his home. 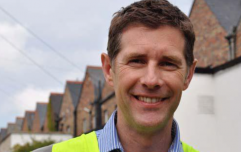 END_OF_DOCUMENT_TOKEN_TO_BE_REPLACED

There was one thing, however, that captured the hearts and minds of viewers up and down the country, one moment that inspired fans of both Room to Improve and Dermot Bannon everywhere, one scene that was so relatable that we couldn't help but nod our heads and think yes, we are all Daniel O'Donnell.

The one where he was told how much money this renovation was going to cost.

Honestly, you wouldn't even be able to blame Daniel for being at least a little shocked and probably very pissed off because €340k is a lot of money to drop on a few extra toilets and a lick of paint.

... And all those other beautiful things Dermot Bannon did to that house but sure look, it's a lot of cash and we empathise with Daniel completely.

Daniel’s face when he heard €340K is like mine when I get to the till in Penney’s when I went in for Tan. #roomtoimprove

Daniel clocking up how many more country hotels and halls he is gona have to fill to cover the costs of this renovation... #roomtoimprove #pissedoff pic.twitter.com/ksCSTeeCkh

Daniel would save a fortune if he just did the gas work himself. #roomtoimprove

The many pissed off faces of Daniel O Donnel and it’s not even over yet 😂😂 #roomtoimprove pic.twitter.com/DJR8fISO90

At the end of the day though, Daniel and Majella's home turned out lovely, everyone was all smiles, and viewers at home were delighted that they gave up their Sunday evening to spend it with Daniel O'Donnell instead.