This seems to be very telling.

Questions have been raised about Jessica Biel being an anti-vaxxer after she met politicians this week to be on the opposition party of a Californian bill that will make it harder for parents to send their kids to school without vaccines.

She posed for a series of pictures with Robert F. Kennedy Jr. who is a well-known anti-vaccination campaigner, standing shoulder to shoulder with him in every picture.

Many people have coined her an anti-vaxxer online however she has never publicly commented on the matter.

Please say thank you to the courageous @jessicabiel for a busy and productive day at the California State House. 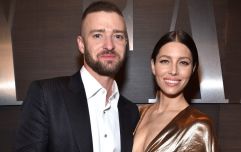 END_OF_DOCUMENT_TOKEN_TO_BE_REPLACED

Robert wrote on Instagram: "Please say thank you to the courageous @jessicalbiel for a busy and productive day at the California State House."

According to Newsweek, the Senate Bill 276 is looking to "restrict medical exemptions vaccinations without approval from a state public health officer."

Many have campaigned against it as they believe that doctors, and not state politicians, should determine if a child should be vaccinated.


popular
13 super sweet baby names many parents haven't discovered yet
Lockdown babies: Parents are opting for some very unique pandemic baby names
14 gorgeous baby names inspired by locations all over the world
The top baby names (so far) of 2020 are in – and we have spotted a trend
This jam drop cookie recipe will keep the whole family entertained (until they start asking for more)
"What a force you were": Tributes paid to Glee actor Naya Rivera
The 30 baby names that are going to be super popular in 10 years time
You may also like
6 months ago
Jessica Biel has a special trick for getting babies to sleep (and swears it works)
1 year ago
This is the secret to a perfect marriage according to Justin Timberlake
1 year ago
The moment Justin Timberlake found out he was going to be a dad is too much
1 year ago
Jessica Biel faces backlash after admitting to teaching her toddler sex ed
2 years ago
Jessica Biel is being mum-shamed over this 'strange' moment with her son
2 years ago
Jessica Biel says emergency caesarean left her 'disillusioned'
Next Page