Do you agree that schools should close on Friday?

The Christmas holidays are just around the corner, but there have been calls for them to be pushed forward.

However, many parents feel like closing a few days earlier won't do much.

She said, “The last thing we want to be doing, is to worry about opening schools."

Professor Loscher explained, "If the schools close this Friday, we have a really long circuit breaker for those children."

If schools were to close on Friday, children would have over a week of low-risk exposure, she told RTÉ's, Claire Byrne.

“If Omicron is two to three times more transmissible, we know that it’s 10 or 11pc of cases at the moment – that’s going to increase next week. 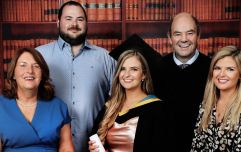 END_OF_DOCUMENT_TOKEN_TO_BE_REPLACED

"That could be up to 50-60pc next week and we have the biggest cohort of unvaccinated people – i.e. children – we will have them mixing to a huge extent coming up to Christmas before we do intergenerational mixing."

Despite her warning, the Department of Education stressed that schools won't close early.

A spokesperson told RTÉ, "There are no plans to alter the school break at Christmas."

Many HerFamily readers believe it is too late to close schools and the damage has already been done.

One teacher told us, "Schools should close early. I'm a pregnant teacher and scared of the Covid numbers rising in schools."

"It won't make a difference," another claimed.

Do you think schools should close this Friday?


popular
Jacques O'Neill speaks out about Paige and Adam's relationship
Gardaí are appealing for assistance in tracing 17 year old missing since July
Musings: I think 'Lawnmower' parenting is damaging for children
Barry Keoghan announces the name of his baby boy
This mum's post about dying to send her kids back to school is too funny
4-year-old girl killed in Sligo caravan park named locally
Ashling Murphy had so much more to give, says heartbroken parents
You may also like
11 hours ago
4-year-old girl killed in Sligo caravan park named locally
2 days ago
No more taxpayer funding for private secondary schools, says Sinn Féin
3 days ago
Siblings who died in tragic Kerry drowning named locally
3 days ago
Dublin swim coach charged with producing child sex abuse imagery granted bail
4 days ago
Toddler 'traumatised' after stepping on burning rubbish on Irish beach
5 days ago
Kathryn Thomas reveals her first daughter is starting school
Next Page