Princess Beatrice is getting married next year and according to reports, she's veering away from a traditional royal wedding.

In contrast to her sister Princess Eugenie, Princess Beatrice is reportedly planning more of a relaxed affair and apparently, Windsor Castle is out when it comes to venue choices.

The 31-year-old announced her engagement to Edoardo Mapelli Mozzi last month and since then, details have been kept under wraps.

However, the royal rumour mill went into overdrive at the weekend and new details have emerged.

It's thought that the couple are hoping for a laid-back affair and are even thought to be considering having the celebrations at the Royal Lodge at Windsor, the official residence of her parents.

What does this mean exactly?

Forget the grand televised affair, the horse-drawn carriage is out and a magnificent diamond tiara, always borrowed from the Queen, may not feature either.

Beabea - wow! I'm so happy for you my dearest big sissy and dear Edo. It's been a long time coming and you two are meant to be. ? by me!! “We are extremely happy to be able to share the news of our recent engagement. We are both so excited to be embarking on this life adventure together and can’t wait to actually be married. We share so many similar interests and values and we know that this will stand us in great stead for the years ahead, full of love and happiness” 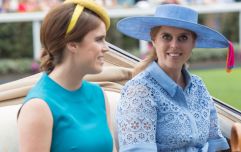 END_OF_DOCUMENT_TOKEN_TO_BE_REPLACED

We have to say it's quite refreshing to see a departure from the royal norm although nothing has been officially confirmed as of yet.

According to The Mail on Sunday, Beatrice has spoken to close friends about her wedding plans and whatever type of venue she does choose, she wants to keep it small so that the day itself will be more "casual".

Although it was suggested that the couple could choose to hold the ceremony in Italy, where Edo is from, reports say this won't be happening and to sum it up, they want something more "low-key".

Edo's son, two-year-old Wolfie and former partner Dara Huang are very close to the couple and earlier this year, Princess Beatrice helped look after the little boy when Dara, an architecht, had to travel abroad for work commitments.

They're also thinking about what will suit them best for the wedding and it seems like they are making sure everyone is thought of before they make any final decisions.