Police in Northern Ireland confirmed they received a complaint after a Tommy Tiernan stand-up show in Belfast.

Tiernan performed at Ulster Hall in the city on Sunday night.

It's reported that a number of audience member "had to get up and leave" in protest at some political jokes told in the show.

Local DUP councillor Dale Pankhurst tweeted that some had been in touch with him over the "contentious" comments.

Received numerous calls from Unionists who had to get up and leave the Tommy Tiernan concert (actor in Derry Girls) in the Ulster Hall due to comments made regarding contentious issues. Understand some have asked for a PSNI investigation to be started.

Belfast newspaper Irish News is reporting that Tiernan, who's from Meath, made remarks about Bloody Sunday and told unionist parties to "f*ck off to Israel". 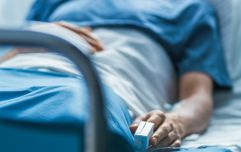 END_OF_DOCUMENT_TOKEN_TO_BE_REPLACED

The Irish Post meanwhile reports that the DUP's Arlene Foster, Sammy Wilson and British Northern Ireland secretary Karen Bradley were singled out by the comedian.

The PSNI told the Irish Independent that it did receive one complaint about comments made during the show but said that they "did not constitute a criminal offence."


popular
Eamon Ryan's mother dies suddenly in tragic accident
Olivia Wilde accuses ex Jason Sudeikis of 'threatening' her
Jump in number of children suffering from rare strain of hepatitis in Ireland
Olivia Newton-John's daughter shares heartbreaking video filmed before her mum's death
Man (30s) dies after getting into difficulty in River Barrow in Co. Carlow
Archie Battersbee's mother issues warning about TikTok challenges
Who is Andrew Tate and why are parents so worried about him?
You may also like
3 months ago
Alyson Nelson's children speak out on "much loved" mum after "abhorrent" murder
3 months ago
Man first to be charged with murder under new domestic abuse law over death of Alyson Nelson in NI
4 months ago
Liam Neeson says he has "kind of a post-traumatic stress disorder" from childhood memory
8 months ago
PSNI defend their attempt to withhold certain material from Noah Donohoe inquest
8 months ago
Noah Donohoe's mum Fiona calls for all police files on his death to be released
9 months ago
Former soldier jailed for abusing girl, 12, whilst on home leave in Belfast
Next Page