Being a working mum is important to me, especially, I feel, because I have a daughter.

Much as I was lucky and got to really have the best of both worlds with my year-long Norwegian maternity leave, as well as sticking to freelancing for a couple of year after that, I also always knew that not working was not an option.

Not that we couldn't have managed or scraped by, as I am sure we could have. (I mean; for starters, we would have saved a fortune on childcare – don't even get me started on the cost of childcare in Ireland and how it is forcing women out of the workforce!). But more importantly, I like to work. I love being able to use my education and also, more importantly, show my daughter (and son) how women can do both. It is possible to LOVE being a mum, but to also enjoy your career and enjoy knowing that you financially have your own two legs to stand on.

Which I why, when I read Irish newscaster Susan Keogh's response to an Internet troll who claimed she should stop moaning about missing her daughter and just quit work and stay at home, it made my day.

After making a comment on her Twitter about missing her daughter Faith when she was at work, a "brave man" suggested (in now-deleted tweets) she shouldn't have a job if she misses her 4-year-old daughter. Well; Keogh put him straight in a letter on her Twitter page, captioned: "I was trolled earlier this week by a guy who thinks I shouldn't have a baby AND a job. Here's what I think." 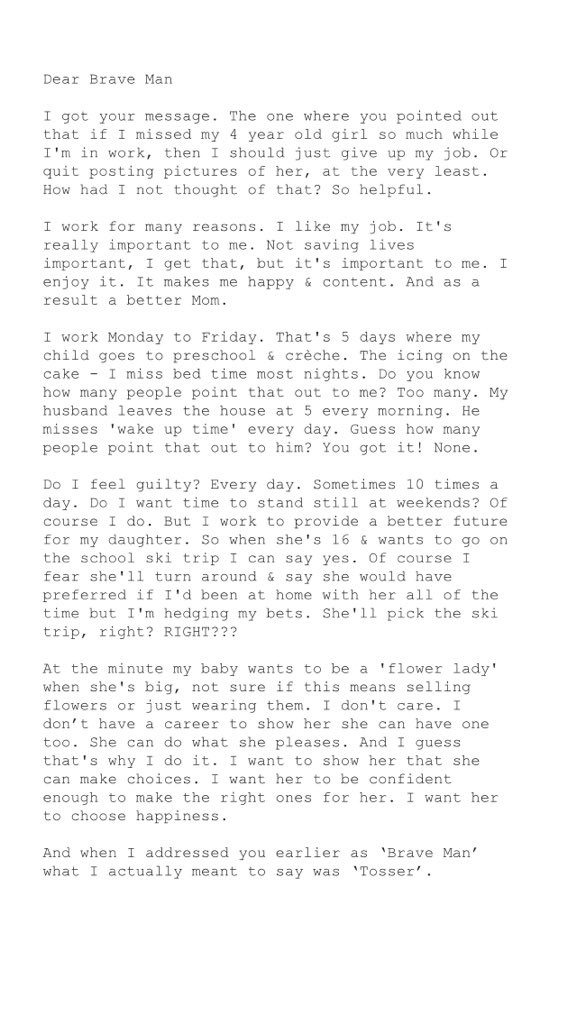 END_OF_DOCUMENT_TOKEN_TO_BE_REPLACED

Addressing the troll as "Brave Man," Keogh writes, "I got your message. The one where you pointed out that if I missed my 4-year-old girl so much while I'm in work, then I should just give up my job. Or quit posting pictures of her, at the very least. How had I not thought of that? So helpful."

"I like my job," she continues. "I enjoy it. It makes me happy and content. And as a result a better mom."

This is so infuriating, and something I think most if us working mums have to deal with in a fairly regular basis.

Keogh notes that she feels guilty "every day" and "sometimes 10 times a day" and yearns for her weekends with her daughter to last forever.

"But I work to provide a better future for my daughter," Keogh says. "So when she's 16 and wants to go on the school ski trip I can say yes. Of course I fear she'll turn around and say she would have preferred if I'd been at home with her all of the time, but I'm hedging my bets."

Ultimately, though, Keogh says she also works to convey an empowering message to Faith. "At the minute my baby wants to be a 'flower lady' when she's big, not sure if this means selling flowers or just wearing them," the mom writes, adding, "I don't care. I don't have a career to show her she can have one too. She can do what she pleases. And I guess that's why I do it. I want to show her that she can make choices." 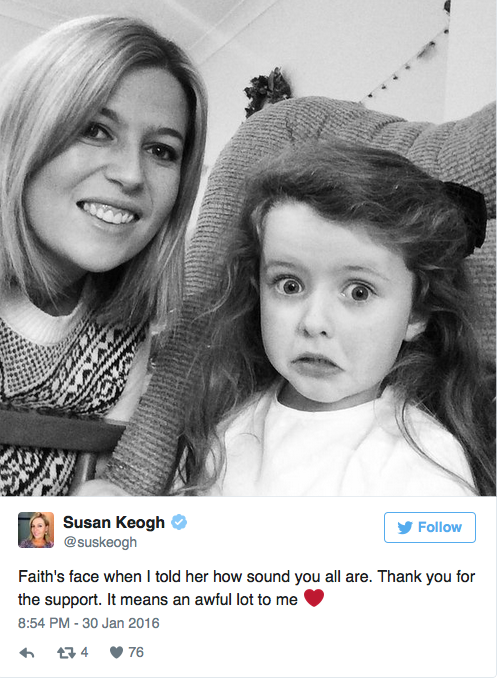 Keogh's tweet with the letter has been re-tweeted over 600 times, with almost 1,400 likes and a ton of positive messages from fellow working parents.

What do YOU think about Keogh's letter? Do YOU think mums who choose to work outside the home faces double-standards? Join in the conversation with us on Twitter at @Herfamilydotie


popular
Expert says Cocomelon acts "as a drug" to kids' brains
6 fun things to do in Dublin on your next family day out
New dad called 'demanding' over list of guidelines to visit newborn son
Mum gets mixed reaction to photo of her drinking beer while breastfeeding
DIY: How to transform your old trampoline into a super-cosy 'summer hideout'
4 ways to fix hard slime with ingredients you probably already have at home
Is your child obsessed with a particular toy or topic? Turns out you should be encouraging it
You may also like
4 hours ago
Children wearing wrong-sized shoes and pyjamas in daytime as parents cut costs
2 days ago
Abortions at record high – with cost of living and job insecurity partly to blame
2 days ago
Irish Cancer Society launches campaign for deferred maternity leave for cancer patients
3 days ago
Gardaí investigating serious shooting incident in Dublin
4 days ago
Robb Elementary school to be demolished in the wake of recent shooting
4 days ago
Over 200 children were seriously injured in childcare centres in Ireland last year
Next Page