This Dad's Genius €147 Baby Cradle Could Be The Safest Yet

An innovative baby bed that mimics the feeling of being in the mother's womb has raised more than €70,000 in Kickstarter funding.

The Crescent Womb, a flexible mesh that can be attached to any cot, was invented by Florida dad James Spencer, who claims his design also minimises the environmental risk factors associated with SIDS and Flat Head Syndrome, while helping to maintain a healthy spinal curve and ease colic.

"Necessity is the mother of invention, at least that was the case when my daughter was born. Stella was the most amazing thing to happen to me but with this miracle came fear, the same fear that all new parents feel.

But fear is only rational if it is unavoidable and from that an idea was born. Just as a baby grows in a mother’s womb an idea began its infancy in my head. This idea became a mission, a mission to help not only my beautiful daughter Stella thrive but to also help every other beautiful new life thrive."

According to its designers, Crescent Womb "naturally supports the baby in the “fetal-tuck” or the “fetal position” which is the natural position for new born babies."

Beautiful little Josephine as content as can be it her Crescent Womb Safety Bed. Thank you so much Josephine and mommy @feelinfinesublime for having an open mind and supporting us through this process. #infant #sids #natural #babyproducts #4moms #baby #pregnancy #ergobaby #bobawrap #natural #organic #pujtub 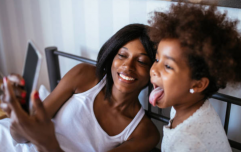 END_OF_DOCUMENT_TOKEN_TO_BE_REPLACED

According to the website: "When you place an infant flat on their back, they instinctively curl up into the fetal tuck. Other than being the most soothing position for babies there are several health benefits associated with maintaining the fetal position:

More than 600 people have backed the project, with those who donated upwards of $100 due to receive the first Crescent Wombs in October. The product is currently available here.

Have you found an innovative baby product we should should know about? Let us know on Twitter @HerFamilydotie.


popular
Josepha Madigan compares issues around schools reopening to Mother and Baby Homes
Sligo teacher creates animated video series for Junior Cert revision
Positive parenting: 11 little things that mean the world to kids
RTÉ are introducing new educational programmes aimed at those sitting their Junior- and Leaving Certs
Irish people urged to send a hug to loved ones on National Hugging Day in aid of Ronald McDonald House
These 5 Foods Could Increase Your Chances of Having Twins
Kelly Clarkson says "people were really mean" to her after she won American Idol

You may also like
7 months ago
Life saving water smart tips for National Water Safety Awareness Week 2020
7 months ago
Poisons Centre warns parents to be wary of Weeverfish when visiting beaches
7 months ago
TK Maxx is recalling 8,000 children's bottles sold in the Republic of Ireland
7 months ago
7 common foods that can be choking hazards to toddlers and children
8 months ago
The genius new product that could save a choking child in seconds
8 months ago
'No beneficial function': The reason you should never let your baby use a walker
Next Page