'Biggest miracle': Rosanna Davison says surrogacy was the best decision she's ever made

Rosanna Davison has said that surrogacy was the "best decision" she and partner Wes Quirke ever made.

The model and former Miss World was watching new Virgin Media series You, Me, and Surrogacy last night with her daughter, Sophia, when she took to Instagram to share her thoughts on the documentary.

Rosanna and Wes welcomed Sophia in November of last year via a surrogate.

She said that although she had wished to carry her daughter herself, she now recognises that surrogacy was "the biggest miracle for us." 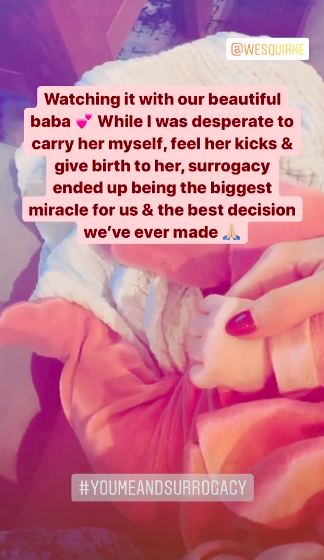 "Watching it with our beautiful baba," she wrote on Instagram Stories last night.

"While I was desperate to carry her myself, feel her kicks and give birth to her, surrogacy ended up being the biggest miracle for us and the best decision we've ever made."

Rosanna and Wes welcomed their daughter in mid November 2019.

Following her birth, the influencer later opened up about the 14 miscarriages she had experienced when trying to become pregnant herself.

"It got to the end of 2015 and we were really keen to start a family so we went for it and it happened very quickly and it was all very exciting," she told Ryan Tubridy on The Late Late Show last month.

"I had the eight-week scan book I told all of my family at five weeks and everyone was just thrilled for us.

"And then kind of abruptly and painfully it came crashing to an end and I had a miscarriage. Tried again, got pregnant very quickly again the same thing happened again at six and a half weeks. In total, we had 14 of these early miscarriages."

Rosanna said that the miscarriages took their toll on her relationship, as well as how she viewed herself as a woman.

Eventually after much consideration, she and Wes settled on the idea of surrogate.

"How could you prepare yourself for watching a stranger give birth to your child?" she said.

"It was just the most surreal, terrifying, emotional, amazing experience. I think about it every day.

"It was a big mash of everything, watching this woman, this amazing woman, I can never thank her enough, giving birth to the child. It was the moment we'd been thinking about for years and wishing for and hoping for."

You, Me, and Surrogacy is a three part series airing on Virgin Media One.


popular
Hilaria and Alec Baldwin have welcomed baby No. 6 — five months after baby No. 5
Unexplained infertility: I went through IVF to get pregnant and here is what everyone should know
Britney shares rare photo with sons Jaden and Sean Preston
Can you pronouce these 7 'unique' baby names? They're trickier than you think
Trust me, you'll never cut cake the same way again after seeing this TikTok trick
Vicky Phelan "hopeful" as she receives first results from new treatment
3 Exercises That Will Help You 'Coregasm' (You Can Do Them at Home!)
You may also like
1 month ago
Rosanna Davidson has a very nifty – and hilarious – trick for telling her twin baby boys apart
1 month ago
Rosanna Davison's new book will tell the story of her journey to motherhood
2 months ago
Rosanna Davidson has learned a thing or two about being a mum-of-three these past few weeks
7 months ago
Rosanna Davison has announced she is expecting twin boys
1 year ago
Rosanna Davison opens up about suffering 14 miscarriages before welcoming her daughter via surrogacy
1 year ago
Rosanna Davison to discuss surrogacy journey on tomorrow night's Late Late Show
Next Page