A massive moment for bump couture.

As the first Monday in May, this Monday should have seen the Gala take place at the Metropolitan Museum in New York. The annual celebration of haute couture and OTT dressing is a fundraising event for the Costume Institute, and puts the Oscars in the shade for true fashion fans as the biggest event on the red carpet calendar.

Sadly, due to the Covid-19 crisis, this year's Met Gala was postponed, with no new date as yet confirmed for the event. However, that didn't stop organiser and Vogue editor Anna Wintour from live-streaming a virtual Gala that featured the likes of Cardi B and Florence Welch on Monday.

Elsewhere, stars who were due to attend the event posted their mood boards and finished looks online. They included Katy Perry, who posted a photo to Instagram of one of the garments that she intended to wear on the night. Captioning the picture, she wrote "What would have been... #TheMetBall2020"

After seeing what she intended to wear we are even more raging that the event didn't go ahead, because the pregnant singer's choice was sure to be a major talking point! 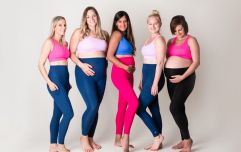 Natal Active, the celebrity favourite activewear for Mums & Mums to be launches in Ireland

END_OF_DOCUMENT_TOKEN_TO_BE_REPLACED

The theme of the night was supposed to be 'About Time: Fashion & Duration' and Katy chose an outfit that paid homage to another superstar, Madonna. Designed by John-Paul Gaultier, her rose-pink silk top was a take on the iconic cone bra that the designer famously made for Madonna's 1990 Blonde Ambition tour.

Instead of a tight corset below the bra, this new incarnation featured an additional silk plate that would have sat on Katy's baby bump. At the back, the top was secured by wide straps that we can only see as a fashionable echo of a baby sling.

There's no information on how Katy intended to style the rest of her look, but what's certain is that the Gaultier look would have gloriously highlighted her baby bump instead of hiding it away. Obviously it's up to every woman how she chooses to dress while she's pregnant, but the default always seems to be swaddling a bump instead of celebrating it, so we like this confident take.

It should have been a major fashion moment – one that we think that deserves a major round of applause!