As mums we often get put on blast no matter what decision we make. Stay at home mums are accused of being lazy and un-ambitious while working mums are told they are neglecting their children. We can't win.

One topic that comes up for debate time and time again is breast feeding versus formula feeding. It's an issue that often gets heated and unfortunately shames a lot of mums in the process.

Celebrity mum Amy Schumer is no stranger to this topic and recently opened up about her decision to switch from breastfeeding to formula feeding.

The actress was extremely frank and honest about why she no longer wanted to breastfeed her son in an interview with Informed Pregnancy;

"I had a lactation expert; he [baby Gene] didn't latch, and I just didn't feel that push to make that happen.

I pumped for the first month or something and then I was like, not for me, this is not for me, I didn't want to do it," she tells Dr. Berlin.

I really encourage women -- there's so much pressure to breastfeed but really, it's all in your head.

Some people absolutely love it and I'm so happy for them but it was bumming me out. Once it occurred to me that I could stop, I was like, 'I'm going stop.'" 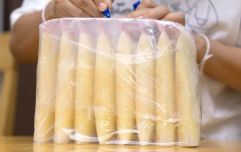 Irish Mother Forced to Throw Away Breastmilk at Airport Security

END_OF_DOCUMENT_TOKEN_TO_BE_REPLACED

I came up against similar issues after giving birth to my first child. I was all excited to breastfeed but no matter how hard I tried there wasn't enough milk coming through to keep my baby full and he would keep hungry crying.

I started to supplement my breast milk with a bottle or two of formula to make sure he was full but eventually I gave up and turned solely to formula.

Like many mothers I felt that judgement when I went to mum and baby groups but I had to do what was in the best interest of both my baby and myself.

Breastfeeding is not something that comes naturally to a lot of us and I think the struggles need to be discussed as well as the success stories.

I was lucky enough to be able to breastfeed my youngest without any issues but the problems I had the first time around has made me more understanding and less quick to judge the mothers who may choose not to breastfeed their child.