This song is scientifically engineered to make your baby happy – does it work?

Time to add it to the family Spotify playlist

Experts have discovered a song that is bound to make your baby happy.

Grammy winner Imogen Heap, musical psychologist Lauren Stweart, child development expert Caspar Addyman teamed up to come up with a song that has the power to make your little tot beam from ear to ear.

The trio analysed data from old children's music and discovered what sounds appeal to children the most.

One of the best things about the song is it isn't half as annoying as the Peppa Pig soundtrack or Baby Shark so parents won't mind it too much.

The team knew the song needed to be up-tempo with lots of changing sounds to keep them amused.

The Happy Song has been praised by mums and many believe it does actually work.

The video for The Happy Song has over 4 million views which says it all. Parents just can't get enough of it. 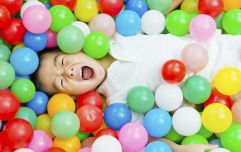 END_OF_DOCUMENT_TOKEN_TO_BE_REPLACED

In an article for The New York Times, one dad shared that he often plays it ten times in a row.

"The reason I play it so much is for the effect it has on my 18-month-old daughter."

"She turns toward the speakers, tears still rolling down her cheeks, and a smile starts to spread across her face, and she nods her head emphatically."

The aim of The Happy Song is to cheer up children between the ages of 6 months and 2 years of age and it certainly does the job.

You can play it on Spotify so if it appears in your On Repeat playlist in the coming weeks then don't blame us. Your kids will be completely obsessed with it.

Let us know if you play The Happy Song and if it works its magic.


popular
"I was absolutely sobbing": Paula MacSweeney shocked after horrible experience in IKEA
Toddler dies after falling from balcony in New York
School called out for stopping parents from buying generic uniforms
My teenage step daughter just told me she is pregnant, what do I do?
"Welcome to the world": Alexandra Burke has given birth to her first child
Copenhagen shooting: Two of the victims were only 17-years-old
I tried 'slow parenting' for a year and I'm never going back
You may also like
1 month ago
Mum horrified after finding a knife inside the box of a doll she was buying for her daughter
4 months ago
Dad is furious with Aldi over 'depressive' and 'inappropriate' toy for sale
6 months ago
Mum reveals genius tip for making Barbie dolls' hair smooth again
7 months ago
US stores pull musical toddler toy after discovering it plays song about cocaine use
8 months ago
Heads up: Aldi has a gorgeous toy collection coming this month
8 months ago
The 10 Toys Amazon Predicts will be trending for Christmas 2021
Next Page