It's a stunning work of art.

If you hadn't already guessed, we're big fans of keeping up to date with the royal family. The latest news surrounding the royals has just emerged and it's a stunning new portrait of Queen Elizabeth II.

The portrait of the ninety-two-year-old head of the Monarch was painted artist Nicky Philipps and features Her Majesty wearing traditional dark green velvet ceremonial robes and an Order of the Thistle collar, the most ancient and noble order of chivalry associated with Scottland.

Queen Elizabeth Is Her Most Regal in New Portrait https://t.co/ih26rNNsYT pic.twitter.com/q9UiDWAZ1w

The elegant cloak also features the order's star that includes the motto, "No one harms me with impunity." The Queen appears to be wearing a white dress underneath and also a pair of pearl earrings.

According to Entertainment Tonight, the portrait was hung in the Royal Dining Room at Holyrood House in Edinburgh, Scotland, the official residence of the British monarch in Scotland.

The publication stated that Queen Elizabeth wore that same robes during her trip to Scotland with Prince William in July. The pair attended the annual Order of the Thistle Service at St. Giles' Cathedral. 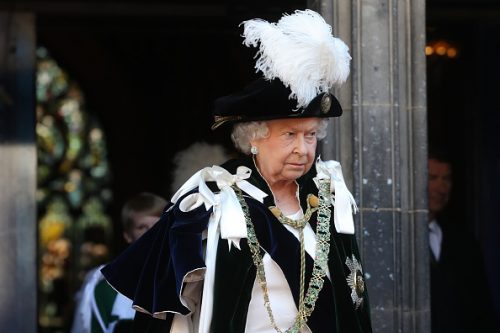 The Queen has had many portraits of herself painted, a lot of which were done by Pietro Annigoni. In 1955 he painted her for the Worshipful Company of Fishmongers and in 1969 for the National Portrait Gallery.

We think the latest one is stunning.


popular
'There will be tears': Kate Garraway says husband could be in a coma for a year due to #Covid-19
11 little things that mean the absolute world to your kids
#Covid-19: Travel permitted anywhere in county, groups of six allowed to meet indoors from Monday
Better sleep: 5 things you need to ban from your bedroom according to an organisational expert
10 reasons why everything is just so much easier with baby number two
Kids still got a pesky case of lice with school out? Here's how to fix it
Get ready to live like the stars because Lidl is selling an entire home cinema range
You may also like
3 days ago
Kate and William are pretty strict about school nights when it comes to George and Charlotte
5 days ago
Prince William reveals that mealtimes with small children can be a bit of a challenge
1 month ago
Meghan Markle is due to give her first post 'Megxit' TV interview and it's happening next week
1 month ago
Prince Louis will be celebrating his 2nd birthday next week – and here's how it will go down
4 months ago
Kate Middleton reveals that Prince William doesn't want any more children
5 months ago
Kate Middleton wants George, Charlotte and Louis to spend more time with their cousin Archie
Next Page