Barry Keoghan announces the name of his baby boy

Barry Keoghan and his girlfriend welcomed an adorable baby boy.

Barry Keoghan has announced the arrival of his son.

The Eternals actor confirmed his girlfriend Alyson Sandro gave birth to a baby boy over the weekend.

The doting dad shared a photo of him and Alyson cuddling their adorable newborn.

The proud dad confirmed his son's name is Brando.

The name Brando is of Italian origin and means 'firebrand and sword'.

Alongside the sweet photo of his family, Barry wrote, "Welcome to the pack my boy B R A N D O"

Barry hinted that their son was born over the weekend when he shared a video from his partner's hospital room. In the short clip, the Love/Hate's star's son can be heard cooing in the background. 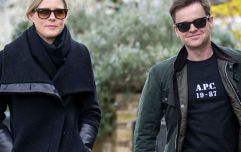 END_OF_DOCUMENT_TOKEN_TO_BE_REPLACED

Alyson reportedly gave birth to their baby boy at a hospital in London.

Barry and Alyson received quite the lavish gift from Gucci to congratulate them on the arrival of their newborn.

Barry zoomed in on the card, which read: "Dear Barry and Alyson, Wishing you both a huge congratulations on the birth of your newborn baby! From all your friends at Gucci xx"

Barry and Alyson have been together since February 2021. The couple confirmed their relationship by attending The Eternals premiere together.

Congratulations to the new parents on the birth of their baby boy.

popular
Breaking: Female child found with severe injuries in Co. Clare
Fans defend Khloe Kardashian for posing in hospital bed with her newborn
Girl found injured in Co. Clare house is in critical condition
School threatens to suspend pupils who don't follow "outdated" uniform rules
Extra child benefit, IVF and free GP care: Key takeaways from Budget 2023
Budget 2023: IVF to be publicly funded and free contraception for under 30s
Vaccine programme to roll out in primary schools
You may also like
2 days ago
10 beautiful baby names that are inspired by our favourite colours
1 week ago
'Trés chic:' 20 beautiful baby names we want to steal from the French
2 weeks ago
Regal: 12 gorgeous baby names with strong royal connections
2 weeks ago
10 baby boy names forgotten in time – that we feel deserve a second chance
2 weeks ago
18 very traditional baby names that will forever sound classic and lovely
3 weeks ago
10 autumnal baby names perfect for your September-born baby
Next Page