The actress remembered Savita on Instagram early this morning.

Since people began going to the polls on Friday to decide whether or not to repeal or retain the eighth amendment, heartbreaking tributes, messages and flowers have been piling up at the mural for Savita Halappanavar on Richmond Street South in Dublin.

And with confirmation yesterday that the Irish public has chosen to repeal by an overwhelming majority, the messages of love for Savita have only continued to pour out. 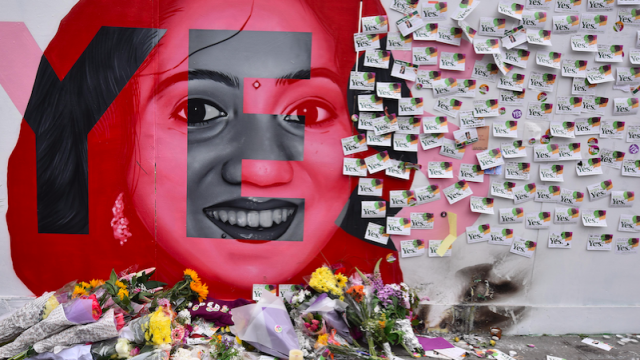 One such person paying tribute to Savita is actress Mindy Kaling.

The star took to Instagram early this morning to commemorate the 31-year-old who died in 2012, saying:

“Savita Halappanavar died at 31 years old from a septic miscarriage, for no good reason.

“But not, because the wonderful people of Ireland have voted to repeal an archaic and deadly law, fewer women will suffer the same fate.

Mindy’s is just the latest in a long list of messages of remembrance for the 31-year-old who died in 2012 after a septic miscarriage at 17 weeks.

END_OF_DOCUMENT_TOKEN_TO_BE_REPLACED

Yesterday, Savita's parents told The Guardian of their joy at the then-expected result.

"We’ve got justice for Savita. What happened to her will not happen to any other family.


popular
"You're disgusting": Prince William roars at photographer who was 'stalking' his family
Expert says Cocomelon acts "as a drug" to kids' brains
Mum gets mixed reaction to photo of her drinking beer while breastfeeding
6 fun things to do in Dublin on your next family day out
The Kivin method could help you get the best oral sex you've ever had
Harry and Meghan release brand new picture of Lilibet to mark 1st birthday
New dad called 'demanding' over list of guidelines to visit newborn son

You may also like
4 hours ago
"It's a competition" – one mum rants about teachers' presents and we agree
5 hours ago
This mum is afraid that she may have given her baby the wrong name
6 hours ago
Family of Deborah James sadly announce that she has passed away
9 hours ago
Free contraception to be rolled out for women aged 17-25
13 hours ago
19-year-old in critical condition after severe car accident in Cork
14 hours ago
Planning a family trip to Kerry? Discover everything Muckross House has to offer this summer
Next Page