The weather has been a mixed bag lately.

There's been rain and wind, it's been cold and warm... it's just been all over the place.

However, while there will be a small bit of rain spreading from the west to the east coast, it will be mainly dry and warm today.

Met Éireann said: "Today will start mainly dry with some sunshine. However, rain on west coasts will spread across the country during the day, reaching the east early this afternoon and the southeast by evening. A clearance will follow in the west and north later in the day.

"Highest temperatures of 16 to 18 degrees. It will become breezy with the rain with fresh southerly winds."

Today will start mainly dry & bright. However, rain on W coasts will spread across the country during the day, reaching the SE by evening. A clearance will follow in the W & N later in the day. Highest temps of 16 to 18 degrees. It will become breezy with fresh southerly winds. pic.twitter.com/QQ7egq4tEr 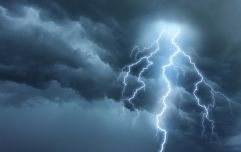 END_OF_DOCUMENT_TOKEN_TO_BE_REPLACED

Meanwhile, the weather forecaster said that tonight will be dry with some drizzle, with temperatures dropping to 12 degrees.

"Tonight it will become dry in most areas with broken cloud. Some drizzle will affect western coastal areas. Lowest temperatures of 12 to 14 degrees in moderate southwest winds."

Thursday is looking even better, with temperatures rising.

"Thursday will be a dry day in the east and south with sunny spells breaking through. Outbreaks of rain and drizzle will affect the west and north. Becoming warm with highest temperatures of 18 to 22 degrees. Breezy at times with moderate to fresh southwest winds."


popular
Safety expert warns against leaving kids’ bedroom doors ajar at night
2-year-old boy hospitalised after swallowing 16 magnets from a toy
Why this year’s school report cards should just say ‘you did your best’
Are you a “petty feminist b*tch” if you don’t take your partner’s second name?
Newborn needs 13 stitches on her face after being "sliced" during emergency C-section
These 5 foods could increase your chances of having twins
Andrew McGinley doesn't "feel like a dad anymore" after tragic deaths of children
You may also like
3 weeks ago
Met Éireann forecasts "sunny spells" as temperatures set to hit 21 degrees this weekend
1 month ago
The weather this bank holiday weekend will not be as nice as last weekend
1 month ago
Saturday set to be one of the hottest days of the year so far
2 months ago
Temperatures to reach 18 degrees in Ireland this weekend
2 months ago
Met Éireann says snow will fall tomorrow night before a rainy weekend
5 months ago
Met Éireann issue snow warning as we are due another big freeze
Next Page