"If we died in the morning, where would Paul go?"

Crystal Swing's Dervla Burke O'Connor has been praised for her honest description of autism on Claire Byrne Live.

Speaking on the show this week, the mum-of-two discussed what life is like as she cares for her autistic son Paul.

Dervla said she feels that sometimes autism can be misunderstood by people, particularly because it differs for each individual.

"You've got the milder end of the spectrum where children and adults you know they have their own challenges and needs but they can go on to live pretty normal lives," she said.

"Whereas, for a child like mine that is not the case. I think that a lot of people out there really don't understand what autism really is all about."

Dervla went on to discuss some of the challenges and difficulties the family face raising Paul, who is non-verbal and can find communication difficult - which often lead to him lashing out.

"If I died in the morning, where would Paul go?" 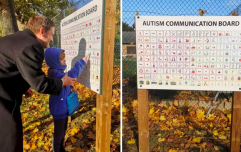 END_OF_DOCUMENT_TOKEN_TO_BE_REPLACED

Dervla previously revealed that she had quit her singing career to care for her child full time. She is now calling for better supports from the HSE for families like hers who have kids with autism.

"If we died in the morning where would Paul go? You cannot just hand him to anybody because he is a care. So families like us, we need peace of mind. We need a roadmap gong forward."

Following the programme, viewers took to social media to thank Dervla for her eye-opening interview.

"Thank you to Dervla Burke O’Connor for speaking so passionately on #cblive tonight. It’s heartbreaking to see you and your family, and so many other families and all those with communication difficulties across Ireland face such hardship for something which is a basic right," one person wrote.

"It’s absolutely sickening the support structures in place for families with children who have special needs. Parents shouldn’t have to fight for support and school places, this cannot be highlighted enough," another said.

popular
Expert says Cocomelon acts "as a drug" to kids' brains
Prince William and Princess Kate would welcome a fourth child with open arms
I won't give my stepdaughter her Xmas present from her late mum's parents unless...
Some parents were disturbed to discover that LOL Surprise Dolls have genitals
3 Exercises That Will Help You 'Coregasm' (You Can Do Them at Home!)
The Kivin method could help you get the best oral sex you've ever had
20 Unisex Irish Baby Names That Are Absolutely Magical
You may also like
1 month ago
Erin McGregor speaks out after spending tough night in hospital with son Harry
4 months ago
Erin McGregor says her heart aches a little for her 6-year-old son
6 months ago
Families are facing "unprecedented barriers" in securing autism assessment in Ireland
7 months ago
John Travolta pays touching tribute to late son on what would be his 30th birthday
8 months ago
UK mum claims autistic son's school placed him in isolation room without her knowledge
8 months ago
Keith Duffy "very proud" of autistic daughter Mia after fighting "hand over tooth" for support
Next Page