If you have been parenting for a while, and are – or have been – in possession of a toddler, you no doubt are more than a little familiar with the joy that is tantrums.

You know, those moments of complete meltdown toddlers are rather prone to – often at the worst time and place possible.

I found myself dealing with one in the middle of the food hall at my local M&S yesterday – when my three-year-old just decided that if he couldn't have the Spiderman chocolate lollipop he wanted, he wasn't going anywhere – and promptly staged a (very loud) lie-down protest right there on the floor.

It didn't help that the place was heaving with weekend shoppers (this was at the very busy Dundrum Town Centre, so you can only imagine my stress levels as people had to veer their shopping trolleys and buggies out of the way from his rigid little body as he lay there, howling).

Anyway, what always saves me during these times is the knowledge that I am not alone. That mums (and dads) across the globe are all subject to these situations – no matter who we are or what we do.

In fact, actress and mum-of-two Drew Barrymore recently dished to Seth Meyers how she found herself dealing with some epic meltdowns – in the middle of Disney World.

"(Disney) was the best experience ever," Barrymore, 41, told Meyers of taking her two youngsters, Olive, 4, and Frankie, 2, to the park. "I just had tears of joy seeing their joy."

But," she cautioned, "if you've ever taken your kids to Disneyland or Disney World, it all ends at some point in mayhem."

END_OF_DOCUMENT_TOKEN_TO_BE_REPLACED

(Are you nodding your heads, parents? Yeah, we thought so.)

In Olive's case, the meltdown apparently happened after her mama refused to let her chase a duck in the park. In hindsight, Barrymore said, she could have probably just let it go. But there were other factors at play. 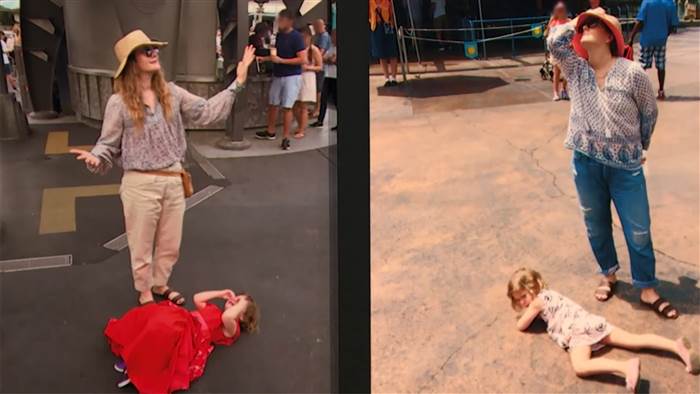 Now, though, the actress claims she's pretty much got tantrum management down to a science. "I think you should have 10 consistent tools in your arsenal," she said. "It's either the tender loving approach or the 'I'm very serious' approach."

Or, you know, the 'if you can't beat them, join them' approach and just start crying too... (Sorry to everyone who was shopping in M&S Dundrum yesterday, I was really only pretend crying, I swear!)