I had a child in my 60s and people think it is selfish- do you agree?

She was 64-years-old when her daughter Pia was born.

Writing in the September issue of British Vogue, Peyton-Jones said, "I knew from the moment I saw her that she was a gift from God, a treasured creature whom I would do everything in my power to nurture and protect. I knew that I would draw on every conceivable resource that I possibly could to become the mother she deserves me to be."

However, despite the love and adoration the now 69-year-old has for her daughter, people have questioned her parenting abilities and it all comes down to her age.

One woman on Mumsnet said women like Dame Julia are "selfish".

“She could well die before the child reaches 25. So very selfish," she added. 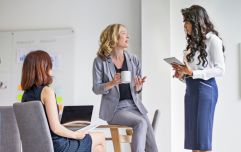 END_OF_DOCUMENT_TOKEN_TO_BE_REPLACED

Numerous users disagreed with the poster and said Peyton-Jones is extremely privileged and has cared for her daughter just as much as any woman would.

"She is an extremely talented and accomplished woman who has stepped away from her career to give everything to her child, including making sure she had a support network in place. She thought long and hard about the decision. There are plenty of people who bring children into the world who give little thought to nurturing them to realise their potential. Good luck to her. I am sure the child will benefit hugely from her care and experience," one said.

However, a lot of people agreed that she was selfish because she won't be around for a lot of her daughter's life.

"I think quite a lot of us could be dead before our children reach 30, for a number of sad and unforeseen reasons," one user pointed out.

One person said older mothers will struggle physically. "As someone in their 60’s I think she must be insane! You just don’t have the energy you have in your 20s/30s/40s."

One added, "I actually think it's more selfish to bring a child into poverty, whatever your age.”

Peyton-Jones has yet to disclose how Pia was conceived, but it's clear that she adores her daughter.

"Even I still find my decision astounding, but I couldn’t be happier that I found the courage to go through with it."

It's evident she adores every inch of her daughter and isn't that what matters most?


popular
A mini heatwave could be coming our way in September
Vogue Williams slams man who refused to swap seats with her on plane
Toddler tries running away from home – because Cocomelon was turned off
Mum issues warning to parents over frightening Cocomelon video
Mum charged with murder after allegedly leaving baby in hot car
Gemma Owen spills the tea on how Luca gets on with Michael
Here's how you can get "free money" from Revolut
You may also like
2 days ago
Natal Active, the celebrity favourite activewear for Mums & Mums to be launches in Ireland
3 days ago
John McAreavey reveals baby number two is on the way
3 days ago
Covid-19 vaccine is safe for people during pregnancy
3 days ago
Ailbhe Garrihy reveals she's pregnant with her second child
3 days ago
Chloe Madeley and James Haskell welcome their first child together
2 weeks ago
I stole my friend's baby's name and now she won't talk to me. Am I wrong?
Next Page