The term 'rainbow baby' has become a way of describing a baby born after a miscarriage, stillborn, or neonatal death.

The reason behind the phrase is a meaningful one – as a rainbow is something that happens after a storm, something beautiful after something scary and dark.

However, one mum recently took to social media to explain why she doesn't like the term and didn't want to use it when she welcomed her own baby after loss.

"I was surprised to be pregnant shortly after losing Blake. I remember the first time I heard 'rainbow baby,' I was pissed," Stephanie Reed wrote.

"It felt like another attempt to leap over losing my daughter. One more way to say, ‘I know your baby died, but look, you get a NEW one!’

I did not want people saying we were having a 'rainbow baby' because to me this equated to forgetting. A fresh baby wasn’t going to replace Blake. I would never stop loving her or take her piece of my heart and give it to someone else."

Reed explains she asked family members to ditch the phrase ‘new baby sister’ when talking to her two-year-old and use ‘next baby sister’ instead.

"I could not handle anything that conveyed a replacement," she explains.

"I had heard a rainbow (baby) was a ‘reward’ for making it through the storm. Let me tell you my truth: There can’t be a rainbow at the end of the storm because the storm of your child dying does not end. The bullsh*t you’ll heal and make it to the other side is a false idea which is pushed because children dying makes the world whisper and feel discomfort."

The real version, she explains, is you will learn how to weather the storm for the rest of your life.

"You will learn to live with a broken heart, and it will f*cking suck. But, during all of this, at some point, there can be bits of joy. I think we have to try to celebrate this joy as best we can." 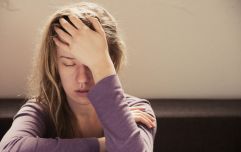 Calls for women to be given paid leave after pregnancy loss

END_OF_DOCUMENT_TOKEN_TO_BE_REPLACED

Late in her pregnancy,  Reed explains she chose to embrace calling baby Ayla their ‘rainbow baby.’

"My feelings shifted when I realised the phrase was the opposite of forgetting or replacing," she explains.

"I started to feel like it honoured Blake and our pain in missing her, all while celebrating Ayla’s presence. I couldn’t imagine not including Blake in the growing of her baby sister. For me, this was a way to love them both in an outward fashion."

"Acknowledging her as our first rainbow baby was a way to say we’re going through hell but we’re still thankful and hopeful (also terrified, in case you forgot) in welcoming our third daughter."


popular
Expert says Cocomelon acts "as a drug" to kids' brains
Whether you’ve got a baby on the way or have an army of your own, the Lidl Big Baby Event is here to help
20 Unisex Irish Baby Names That Are Absolutely Magical
These 5 foods could increase your chances of having twins
Majority of Covid restrictions to be lifted at 6am – here's what little will remain
5 reasons having a son is the best (even if you were hoping for a girl)
Mum shares her hack for cleaning ball pit balls and it's such a time-saver
You may also like
2 days ago
Jessie J opens up on her mental health after pregnancy loss
1 week ago
Woman who gave birth to stillborn baby in UK prison cell "will never forgive jail"
1 month ago
Rosanna Davison says she felt "survivor guilt" after pregnancy loss
1 month ago
Selling Sunset's Maya Vander shares tragic still birth news
1 month ago
Jessie J thanks fans and bereaved parents for support after suffering pregnancy loss
1 month ago
Premature baby born at 22 weeks was initially saved by a plastic bag
Next Page