I opened the door and knew instantly I was in the right place.

There were at least eight other women with bumps of varying sizes choosing seats in preparation for the first of our antenatal classes. It was a funny sight to see that many pregnant ladies at one time and as it turned out, we were all at the same stage. I couldn’t help but compare my bump in terms of size and position. One thing I know for sure now is that there is no such thing as a ‘standard bump’. One of the ladies barely looked pregnant while others struggled to walk because their bumps were so large.

The good news about antenatal classes is that you are entitled to take paid time off work to attend while fathers get the same entitlement for the last two. They are usually offered to parents from week 30 onwards and of course, if you’re attending them through the hospital they are free.

We received a list of dates for five classes when I reached week 30 but no specific details on what to expect or what would be covered. However, I needn’t have worried as, after we sat down, the midwife Ann laid out what the next few weeks would entail. Aside from the obvious issue of labor and delivery, we would discuss pain management, physio techniques, relaxation methods, care of the baby and advice on breastfeeding. We would also be shown around the labor ward and told about some of the machines that monitored both mother and child.

The blunt reality of what we were about to put our bodies through would be laid bare and most of us winced when Ann took out a doll and a plastic pelvis to illustrate what we had to do! Luckily, the Q&A session was conducted with an equal measure of humor which helped alleviate any real concerns we had over giving birth for the first time. Afterward, we were left in no doubt that any notions of self-pity would be overcome by the wonderful reward ahead. 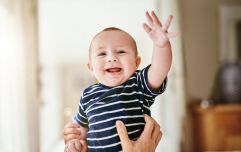 END_OF_DOCUMENT_TOKEN_TO_BE_REPLACED

We were also treated to a 30-minute physio session which included tips on getting up from a chair and a bed while heavily pregnant. It was amazing how many of us were doing this incorrectly, especially when it’s so easy to injure yourself carrying the extra pounds around.

I’m looking forward to the next few classes and my hubby has already declared his firm intention to come to his part. It’s great to be able to involve him in the classes although he jokes that he’s coming just to know where to park and drop me off. The cheek!

popular
This is everything women need to know about ovarian cysts
Viewers in tears after last night's emotional episode of DIY SOS
These 40 baby names are set to trend in 2023
Babies born in February have some pretty cool advantages – no, really – it's true
Shows like Bluey and Peppa Pig are actually bad for kids, expert warns
Study says that dads get more sleep than mums and tell us something we don't know
Man sues friend for £1.9m after she refused to be his girlfriend
You may also like
1 month ago
"I felt so much regret": Ashley James says she once regretted motherhood
1 month ago
Rebel Wilson felt "disconnected" after welcoming baby via surrogate
2 months ago
Cameron Diaz gets honest about becoming a mum in her 40s
2 months ago
My daughter doesn't want her "embarrassing" grandparents at her birthday- what should I do?
4 months ago
Positive parenting: 5 signs you are doing a great job as a parent
4 months ago
This mum's post about the lack of care for new mothers will hit home for many
Next Page