WATCH: Man 'simulates' being pregnant, can't get out of bed

"I wish we could fling ourselves like that without pulling a ligament or muscle."

One of life's frustrations is the fact that so many people in the world will never understand just how painful pregnancy and birth really are.

Taking a step to address this, an Australian man on TikTok attempted to stimulate the pain and discomfort of being pregnant in a now viral video.

Maitland Hanley, or @maitlandhanley, enlitsted his friends to help strap a watermelon to his belly, as well as two cantaloupes to his chest in a bid to approximate the body of a heavily pregnant woman.

From there, he attempts to go about his daily life, but is thwarted when he finds himself unable to get out of bed, due to the weight of the fruit.

His friends can be heard off camera pretending to be an alarm clock, waking him up for the day.

Maitland confidently stares down the camera and says: "Oh yeah? Watch this." 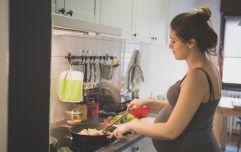 END_OF_DOCUMENT_TOKEN_TO_BE_REPLACED

You can then see him come to the realisation that life as a pregnant person is not as easy as he might have thought.

He makes multiple attempts to rise from the bed, but is ultimately unsuccessful, and struggles to even sit up.

In the comments, one mum felt that he had it easy. She wrote: "I wish we could fling ourselves like that without pulling a ligament or muscle."

It's important to note here that Maitland only simulates the sensation of having concentrated weight on his upper body. His attempt to "experience" pregnancy falls short of simulating a litany of side effects including, but certainly not limited to, nausea, constipation, gas, hemorrhoids, swelling, fatigue and yeast infections.

He did, however, in a follow-up video indulge in his cravings and, once he got the hang of walking with a watermelon strapped to him, swung by a MacDonalds.

After collecting his food, he swaggered around the restaurant and told other customers that he had "pregnancy cravings", and said hello to his "fellow mums".


popular
Parents with different surnames are being asked to carry their child's birth cert to travel but is it legal?
Everything parents need to know about the respiratory syncytial virus
Can you pronouce these 7 'unique' baby names? They're trickier than you think
Young woman suffers "life-changing injuries" after being hit in face with firework in Galway
Mum poured bleach into baby's feeding tube to get a good night sleep, court hears
The Kivin method could help you get the best oral sex you've ever had
20 Unisex Irish Baby Names That Are Absolutely Magical
You may also like
3 days ago
The Rotunda will start removing remaining restrictions this month
3 days ago
Apparently "baby stags", or "dadchelor" parties, are a thing for dads-to-be
4 days ago
The 10 most popular baby boy names in England and Wales have been revealed
1 week ago
Morning sickness: 10 tips that might just help – even just a little bit
1 week ago
Doctors urge pregnant women to get vaccinated after rise in ICU admissions
2 weeks ago
Opinion: Stephen Donnelly is making pregnant women feel like they don't matter
Next Page