Kim Kardashian has just announced the name of her fourth child.

The reality TV star and her husband, Kanye West, welcomed their little boy earlier this month via surrogate - and kept many of the details surrounding his birth (including his name) private.

However, on Friday evening, Kim took to Instagram to give her fans the first look at the newest member of the Kardashian-West family - and announced his name.

The post features a text conversation with Kanye, alongside a picture of the newborn in his crib.

"With the arrival of our fourth child

"We are blessed beyond measure

"We have everything we need."

Kim announced the newborn's name in the caption for the photo: Psalm West. 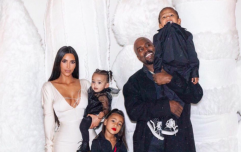 Apparently, this is the inspiration behind Kim Kardashian and Kanye West's son's name

END_OF_DOCUMENT_TOKEN_TO_BE_REPLACED

The news that their surrogate had gone into labour had been confirmed the day before, when Kourtney Kardashian surprised Kris Jenner on the Ellen DeGeneres Show. .

She brought her three children - Reign, Penelope, Mason - as well as Chicago, Saint and North onto the show for a Mothers' Day surprise.

She explained that it had meant to be Kim who would appear on the show - however, their surrogate had gone into labour.

It was first reported that Kim and Kanye were expecting their fourth child in January this year.

The couple are already parents to North, 5, son Saint, 3, and daughter Chicago, 1.