Fruit fan? Kiwi berries are about to be your new obsession

Just when you think you've seen it all.

There's something about smaller versions of our favourite things that makes us happy - from miniature cross-body bags to miniature dogs, it's fair to say we love all things tiny.

Now you can even have one of your five-a-day in miniature in the form of kiwi berries.

These dotey little guys are just like the real thing but smaller and with a grape-like skin rather than a regular kiwi's characteristic fuzz, making them a handy on-the-go snack.

According to Delish, the kiwi berry is nothing new - it's native to parts of northern Asia and has been grown in the US for over 150 years. 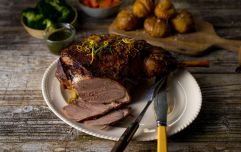 Stuck for Easter dinner? This lemon, rosemary, and salt-crusted lamb will have the whole family drooling

END_OF_DOCUMENT_TOKEN_TO_BE_REPLACED

Unfortunately, this Instagram-friendly fruit isn't too widely available just yet but that's set to change as major food suppliers aim to capitalise on the world's current obsession with all things healthy.

Keep an eye out for kiwi berries on menus and in the supermarket - they could be coming to a smoothie bowl near you soon.


popular
Stacey Solomon defends choice to let son play outside after receiving nasty messages
Lockdown: my child is upset that he might not get to say goodbye to his teacher
Stuck for Easter dinner? This lemon, rosemary, and salt-crusted lamb will have the whole family drooling
The largest family in Britain have just welcomed baby number 22
20 short-and-sweet baby names which are really big on personality
Woman demands her twin sister change her adopted daughter's name as she wants to use it
'I’ll let the baby do the talking': Hilaria Baldwin reveals that she is pregnant
You may also like
19 hours ago
There's a virtual white wine tasting happening on Instagram tonight
4 days ago
All the yummy food: 5 brilliant new cookbooks to inspire your healthy lockdown cooking
1 week ago
Easter celebrations at home with your family! How to cook the PERFECT beef roast
1 week ago
No need to run to the shops: a recipe that will turn you into a bread making pro
1 week ago
Need some cheering up during the lockdown? Prosecco Popsicle Molds exist
1 week ago
Recreate afternoon tea at home with these delicious Mini Yogurt Scones
Next Page