You got to hand it to her – she had a valid point.

A birthday cake request from a three-year-old girl went viral this week when pictures of her birthday cake were posted online by her family.

Leona, who was celebrating turning three, had asked that her cake depicted a very specific scene from her favourite movie, The Lion King. The scene? When Mufasa, Sima's dad, fell off a cliff and was trampled to death by a hoard of buffaloes.

Sounds morbid? Well, little Leona had a reason for her rather strange request.

My niece turned 3 today!! She asked for a Lion King cake but specifically the moment where Mufasa dies, because “everyone will be too sad to eat the cake and it will be all for me.” pic.twitter.com/UOatqCUSj0

“Everyone will be too sad to eat the cake and it will be all for me," Leona said, according to a Twitter post by her uncle, Casey Feigh. 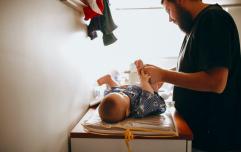 END_OF_DOCUMENT_TOKEN_TO_BE_REPLACED

"Leona is hilarious and quirky,” her mother, Alison Feigh, explained in an interview with "TODAY" Digital. “She's also a very empathetic, sweet kid.”

Leona's cookies-and-cream-flavored cake, made by Thirsty Whale Bakery in Minneapolis, was designed to show her favourite scent from the 1994 Disney classic – scene, claw marks and all.

Her mother explains she was so embarrassed to tell the bakery of her daughter's strange cake request, she actually e-mailed instead of calling.

"I actually emailed them because I was too embarrassed to call," Feigh explained.

"I was like, ‘I’ll just put it in writing and click send. The worst they can say is no.’”

popular
Bride asks for divorce day after wedding following groom's disrespectful cake stunt
4 ways to fix hard slime with ingredients you probably already have at home
Police believe they know what happened to missing dog walker Nicola Bulley
Stacey Solomon's fans think they've figured out her baby's name
Going on solo holidays is good for mothers, science says
20 Unisex Irish Baby Names That Are Absolutely Magical
Skin kind face paint and safe nail polish to use with the kids this Halloween
You may also like
1 week ago
Not every parent will agree with this mum's stomach bug hack
3 weeks ago
This clever hack could help keep your toddler awake in the car
3 weeks ago
Dublin Airport worker goes viral for singing and dancing in security queue
1 month ago
Little girl heartbroken after only two people show up at her birthday for odd reason
4 months ago
Mum shares important warning after almost losing her newborn to a kiss
4 months ago
'Don't do it if you are a parent' – paediatrician warns against viral organising hack
Next Page