A couple who were given the wrong baby at a hospital in El Salvador have finally been allowed to travel home to the US.

Richard Cushworth, who is originally from the UK, and his Salvadoran wife Mercedes Casanellas welcomed their baby boy in her native country in May 2015.

According to BBC News, their newborn spent his first night in the hospital nursery and the following day the couple were given a different baby to take home.

Despite Mercedes’ doubts, nurses insisted the child was hers. However, when they returned home to Texas, a DNA test confirmed her fears.

Thankfully, the babies were immediately return to their biological parents but the Cushworths have had to fight for last eight months to obtain a birth certificate in order to bring their son Moses home. 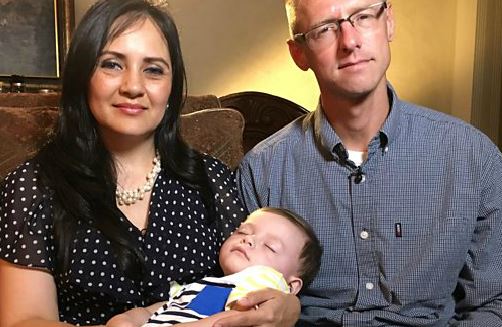 While the process has been emotionally draining and has bankrupted them, they are relieved to be travelling home with their baby boy.

END_OF_DOCUMENT_TOKEN_TO_BE_REPLACED

Mercedes revealed: "The thought that the baby I had been nursing, taken care of, loving him, bathing him, that he was not mine and then I had another thought which came with it -where's my baby?

“So I had two thoughts -- what's going to happen with this baby and where's my baby… I think we were in love with the baby.

“Even when I did the DNA tests, I thought I was betraying him. That was the feeling I had - I'm betraying my son but I cannot live with this."

popular
This is everything women need to know about ovarian cysts
Babies born in February have some pretty cool advantages – no, really – it's true
These 40 baby names are set to trend in 2023
Viewers in tears after last night's emotional episode of DIY SOS
Letting teens drink alcohol at home won't stop them binge drinking
Bringing a dog to work can increase morale and productivity, says DSPCA
Study says that dads get more sleep than mums and tell us something we don't know
You may also like
5 days ago
Bride asks for divorce day after wedding following groom's disrespectful cake stunt
5 days ago
Four year old girl killed in dog attack remembered as "a very happy child"
1 week ago
Identical twins trying to get pregnant at same time with shared fiance
1 week ago
Man claims to have found infant remains near Bessborough site in the 90s
2 weeks ago
Patient in his 80s killed in Cork hospital ward following attack
3 weeks ago
Jeremy Clarkson apologises to Meghan Markle over for 'disgraceful' column
Next Page