Usually, when someone announces to their family they are expecting a baby, this is great news and a joyful occasion to be celebrated.

However, one woman recently took to Reddit to complain that her brother and sister-in-law's recent pregnancy announcement was anything but. The reason? They used the family's annual gift exchange as an opportunity to do so. In a rather strange manner too.

"My family has a 21+ adult-only gift exchange, volunteer only," the woman wrote in her post to Reddit.

"If you sign up, you have to spend $20 on each person. We have a Google Doc with a list of things people would like, their sizes, and favourite snacks. You follow the list, you spend $20 per person, and we have the exchange after the kids go to sleep."

She said her brother Kyle and sister-in-law Kelsey were both part of the exchange and had asked to go last because they had "something special they wanted everyone to open together."

Rather than spending $20 on each person, they did something a little different.

"Kelsey and Kyle spent $5 per person," the woman continued.

"It was a sonogram picture in a cheap dollar store frame, a note saying '$35 has been donated to the baby in your name' and a 2XL shirt with puffy paint that said 'BABY BELLA 2022'."

There were the regular niceties and congratulations and then the woman's dad suggested they continue the gift exchange. T 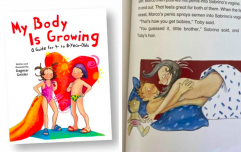 END_OF_DOCUMENT_TOKEN_TO_BE_REPLACED

However, the couple explained that the announcements WERE the gifts and things blew up from there.

"My dad was like, 'Everyone can take their gifts back for Kyle and Kelsey, because this is bullshit, and they knew exactly what they were doing'," the woman continued, adding some people did take back their gifts and the rest sort of sat there in shock and left shortly afterwards.

A few days later, the woman explained her brother came to visit with a proper gift and apologised in an angry tone, saying, "Kelsey has been crying about it for days now, so thank Dad for ruining the surprise."

He asked his sister if she liked the gift and she answered honestly.

"Everyone else got you a real present, with thought put into it," she explained.

"You didn’t even get me a shirt that fit, that was printed professionally, and then spent the majority of the money on yourself. It felt cheap and ruined the spirit of the exchange."

She reveals he then called her an a**hole and left.

"How is that considered an appropriate gift?" 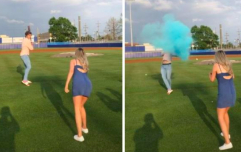 END_OF_DOCUMENT_TOKEN_TO_BE_REPLACED

After posting the story to Reddit, the anonymous woman received tons of comments on her story, with most agreeing with her that her brother and sister-in-law has totally been in the wrong on this one.

"How is it considered appropriate to gift oneself the money that was supposed to be spent on gifts for others?" one Reddit user asked.

"Dad was correct in that it was a BS move by Kyle and Kelsey - but think he went about it in the wrong way."

Another one commented on the thread: "He's quite right - there's no way that they thought a 'donation in your name' to their wallet was a decent gift, they just bet that no one would call them on it."

"People need to stop thinking that somehow their baby is a gift to others," chimed in another. "Other people can be excited for you and glad for a new baby in the family and supportive - but it is not a birthday gift or a Christmas gift or a wedding gift."

A third Reddit user who completely agreed with the woman joked about the situation and wrote:

What do YOU think? Would you have been happy with this 'gift?'


popular
Stacey Solomon slams 'one night of freedom' stag-do ahead of wedding
Claire Byrne reveals her RTÉ show is ending after 7 years
Meghan Markle visits Texas school shooting memorial
Woman hit by a motorbike in Dublin city fighting for her life in hospital
Deborah James praises doctors who gave her more time with her children
9 of the best outdoor family experiences in Ireland's Ancient East
Dealing with sick tummies, sore heads or high fevers? We've got the perfect solution...
You may also like
6 days ago
New mum criticised for admitting she won't bathe her baby until he is a month old
1 week ago
Parenting confession: "My in-laws are gatecrashing our family holiday"
2 weeks ago
'Coastal grandmother' is the viral 2022 fashion vibe you did not see coming
2 weeks ago
A TikTok-er showed the size of an epidural needle, and yep, it's huge
3 weeks ago
Women are sharing pictures of their 'saggy' boobs on social media – and here's why
4 weeks ago
Jonathan Saccone Joly 'regrets' his social media fame and deletes all YouTube videos
Next Page