Bob Cornelius's heart sank when he read this on a homework project by his son Christopher, asking him to list his friends.

The 11 year old is on the autistic spectrum, and that heartbreaking answer prompted his dad to post on his Facebook page appealing to parents to emphasis the importance of compassion to their children. 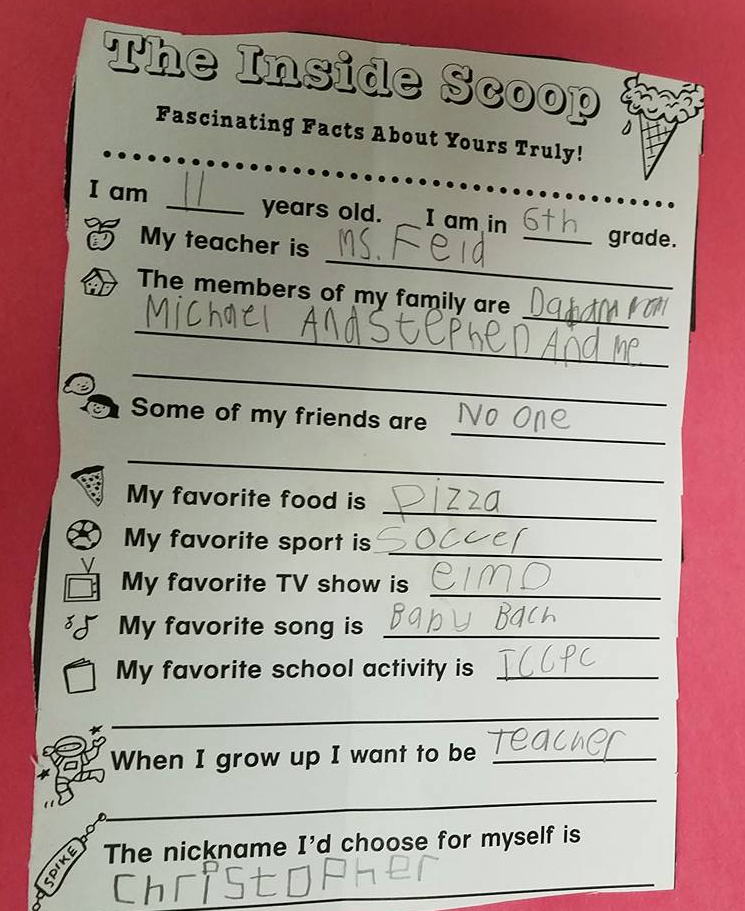 "It's not their fault.... that's the saddest part. They were clearly not taught to embrace and accept the differences of others. Not by their teachers, which would have been nice, had they thought to do so, but by their parents. I don't mean to imply that parents that don't have this conversation with their kids are bad people, but only that somewhere in between working, soccer practice, and homework, it never occurred to them to have this particular conversation."

In the emotional post, he points out how heartbreaking the situation is for 11 year old Christopher;

"Christopher's brothers have had many, many sleepovers over the years, obviously, in front of him, and it has not gone unnoticed. "Can I have sleepover?" Christopher has asked.

"Sure, buddy....with whom?" As a response, he would flap his arms and stim instead of answering. He didn't have an answer because he didn't have a name.

Because he didn't have a friend.  He's never had a "real" friend.

Ever. And because he's had no friends....there was no one to invite."

Bob says there is no easy way to deal with a situation he finds himself in, but he appeals to all parents to stop and teach their children about how important it is to embrace others, even if they are a little different:

"I don't have a solution. I don't have an answer. The reality is that I have to rely on the compassion of others to be incredibly understanding in order just to sit next to him, attempt to engage him, and make him feel included."

Christophers's dad says some day he will find a 'true friend', one who gives Christopher the voice he doesn't currently have. And for that, he says, he will be forever grateful:

In Ireland, we have just began the Buddy Bench project where benches are placed in school yards so children who have no one to play with can sit and signal they would like a playmate.

What would you like to see done to help integrate more children? We would love to hear how you teach your child to be more compassionate?


popular
Eamon Ryan's mother dies suddenly in tragic accident
Who is Andrew Tate and why are parents so worried about him?
Lottie Tomlinson and Lewis Burton welcome their first child together
Olivia Wilde accuses ex Jason Sudeikis of 'threatening' her
Olivia Newton-John's daughter shares heartbreaking video filmed before her mum's death
Archie Battersbee's mother issues warning about TikTok challenges
Here's where you can get the best deals on all your Back to School essentials
You may also like
4 days ago
Osteopath shares mesmerising trick that calms colicky baby in an instant
6 days ago
Mum's hack for getting your kids to listen without having to yell goes viral
6 days ago
Creative mum reveals tricks to occupy kids on weekends without spending money
1 week ago
Sonya Lennon reveals ‘judgement’ her daughter, 17, experienced when buying pregnancy test
3 weeks ago
Confession: "I spy on my husband to make sure he is cleaning"
3 weeks ago
This resturants 'Maternity Salad' claims to help overdue mums go into labour
Next Page