Were you watching last night?

Fans across the country sat down last night with their leftover sandwiches to enjoy the festive special of Mrs Brown’s Boys.

Yes, for many it’s not Christmas without checking in on Agnes and her boys and this year was no different – except for one thing.

Following Rory Cowan’s departure from the show this summer, the showrunners announced that there would be another actor stepping into the role of Rory Brown. 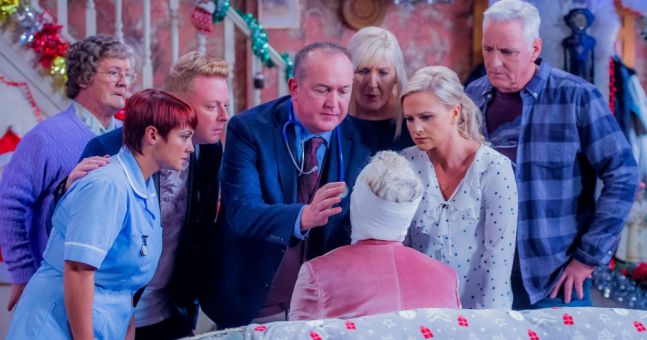 Yes, fans waited patiently to see the big reveal of the new Rory Brown during last night's show and how they would explain the unfamiliar face.

At the start of the Christmas episode, Rory, the episode’s titular Mammy’s Mummy, appears to have undergone plastic surgery - and Agnes is fretting over his condition.

And after spending the majority of the seasonal special wrapped up in bandages, he was gradually unveiled, introducing fans to the actor who would be taking over the role – Damien McKiernan.

However, it seems not all of the fans were happy with the new Rory or the storyline that introduced him.

Really don’t like the new Rory in #MrsBrownsBoys ? Bring back the old Rory please!! Mrs Browns Boys ain’t the same without the real one☹️ Why did he even have to leave?@brendanMrsBrown @1rorycowan ?

No one can take @1rorycowan ‘s place. This new fella is no good @MrsBrownsBoys #mrsbrownsboys

Extremely disappointed with the Christmas episode, and as far as the new rory?? #MrsBrownsBoys

popular
CMO confirms death of child in Ireland from invasive Strep A
Father took daughter to hospital three times before she died of Strep A
Elf on the Shelf is actually pretty bad for your kids, according to an expert
Rod Stewart's 11 year old son rushed to hospital after collapsing at football match
Expert says Cocomelon acts "as a drug" to kids' brains
"Hard to be a parent": Made In Chelsea's Maeva D’Ascanio rushes newborn son to A&E
The government has launched a new funding model for Irish childcare services
You may also like
6 months ago
Mrs Brown’s Boys star Fiona O’Carroll says being a single mum is a "struggle"
1 year ago
Mrs Brown's Boys star Fiona O'Carroll splits from co-star husband
2 years ago
Two new Mrs. Brown’s Boys Christmas specials are coming this Christmas
3 years ago
Tonight's Late Late Show set to pay tribute to Mrs Brown's Boys
3 years ago
Over 612,000 people watched this RTÉ programme on Christmas Day
4 years ago
Mrs Brown's Boys actor tipped for spot on Dancing With The Stars
Next Page