Kim Kardashian has been called out over what her daughter North wore to Kourtney's wedding.

The 8-year-old joined her mum in Italy for the lavish wedding, but fans were less than impressed with her outfit.

The mum has been slammed for her girl's 'inappropriate' corset.

One wrote, "Take this f***ing corset off north like that’s literally a lingerie piece."

"Albeit with a t-shirt, this corset/bustier top is rather inappropriate for North West. Let children be children," another said.

"They need to let North dress her age. What’s she doing in a corset with mesh?" another asked.

One fan stressed that Kim needs to let her daughter dress as a child.

"The corset isn’t even cinched, and it looks like it’s made specifically for a North’s body- there’s literally nothing wrong with it at all," one said. 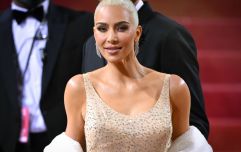 END_OF_DOCUMENT_TOKEN_TO_BE_REPLACED

"Think of it as a tube top. It’s a child exploring fashion. North dresses herself according to what she believes is stylish," another added.

"It’s not cinched or anything. I don’t see a problem with it. The way she’s wearing it it’s basically a sweater that only goes up to her chest," another wrote.

Kim and her eldest child joined Kris Jenner, Kylie Jenner, and her daughter Stormi and Khloe Kardashian at Kourtney and Travis's Italian wedding over the weekend.

The couple tied the knot in front of their nearest and dearest in Portofino.


popular
Multiple people killed in Denmark shopping mall shooting
I tried 'slow parenting' for a year and I'm never going back
Opinion: The obsession with routines and sleep training for babies is weird – and stressful
The 'Ice Cream' is being called a 'must-try' sex position - but there's one flaw
Musings: Dear bra designers, the mums with big boobs would like pretty bras too
Teenager dies following road traffic collision in Kildare
Top Tips On How To Recover And Refuel Your Body After Miscarriage
You may also like
1 month ago
Kim Kardashian is releasing a brand new skincare line
1 month ago
Kim Kardashian says she'll "hopefully" have one last wedding: "Fourth time’s a charm!"
2 months ago
Did Pete Davidson get a tattoo of girlfriend Kim Kardashian's kids?
2 months ago
Nicola Coughlan opens up about "best friend" Kim Kardashian: "She's so nice"
2 months ago
Kim Kardashian admits to photoshopping her niece True into Disneyland photos
2 months ago
"Princess Diana didn't even do this": Kardashians slated over visit to Disneyland
Next Page