This Welsh barber's unique approach to his craft paid off big time with one tiny customer...

Ever since Jamie Lewis and Denine Davies’ you son Mason was diagnosed with autism a few months ago, they had been struggling to find a barber who could help their boy sit down and feel comfortable during a haircut.

Because of sensory overload, haircuts are often difficult and even at times painful for people with autism.

Local barber James Williams from Briton Ferry, Wales, had tried to cut the youngsters hair on a few occasions, but had not been able to succeed. "He would never let me go near his ears," Williams explains. "Sometimes this could even make him jump up and run away."

That's when the compassionate barber decided to take a somewhat different approach.

Noticing that little Mason was more comfortable lying on the floor than sitting in the barber's chair, Williams decided to come down to his level. 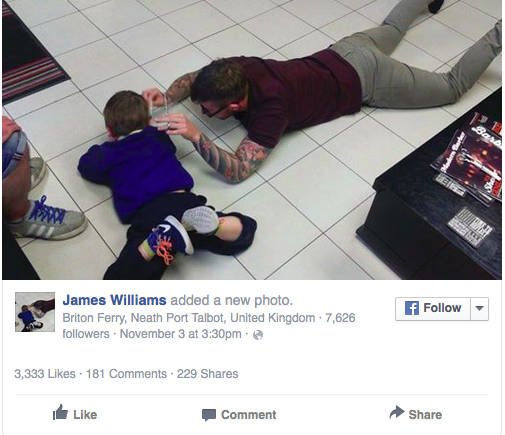 "I went on the floor as I found that's where he always wanted to be," Williams – who also quieted the rest of the shop for the cut –  explains.

"He played on his father's phone, watched random programs, and that entertained him. So I thought, 'Let's join him and lay with him and see if it works.'"

And it did indeed.

END_OF_DOCUMENT_TOKEN_TO_BE_REPLACED

In a post shared to William's own Facebook page, it shows himself lying on the ground next to Mason, and cutting the tot's hair. Hoping to raise awareness about the challenges that families who have kids with autism face, Williams  explains how sometimes you just have to use less that traditional techniques to get things done. 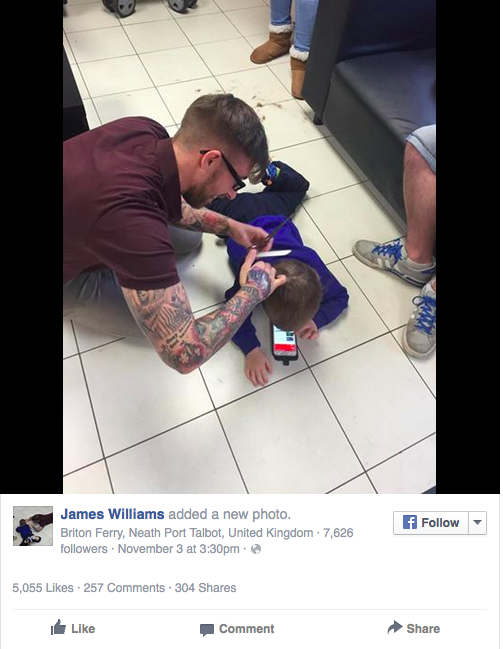 "I have been trying to cut Mason's hair a few times, but today I finally achieved it where we both lay on the floor in silence and he allowed me to cut away and give him his first proper haircut, again achieving something in a job I love making both parents happy by giving extra attention to Mason by building a friendship at trust with Mason and myself."

And not only did his theory and method pay off, he got a sweet reward from Mason at the end.

"I asked for a high-five, he hugged me," Williams wrote on Facebook. True barber love!"

Now, if that story didn't put a little smile on all your faces, we don't know what will!

Any mums or dads of autistic children with similar stories out there? Have you come across someone who was willing to go that extra mile in order to help YOUR little one? Please share your stories with us and send me an e-mail at Trine.Jensen@HerFamily.ie


popular
Midwife tragically dies in front of her children on flight
Faye Winter slams trolls who said they hope she can't have children
Maura Higgins reveals she was sexually assaulted by taxi driver in Ireland
Khloe Kardashian 'on cloud nine' after welcoming a baby boy
Caitriona Balfe pens moving tribute after her father's sudden death
Here's where you can get the best deals on all your Back to School essentials
11 of the best fun playgrounds in Dublin
You may also like
2 days ago
650 children strip-searched by Met Police in 2 years, report reveals
2 days ago
Actor Anne Heche rushed to hospital after car crash
2 days ago
Investigation into the discovery of a body of a male, Drumcondra, Dublin
3 days ago
Gardaí appealing for witnesses following fatal traffic collision in Skibereen Cork
6 days ago
Gardaí in Dublin investigating allegations of the Sexual Exploitation of Children
6 days ago
Parenting influencer accused of exploiting her toddler and attracting predators
Next Page