Entrepreneur Ramona Nicholas: Why I wish I could turn back the clock and enjoy maternity leave

Ramona is a mum to five-year-old Alex, a self-made entrepreneur and joint Managing Director of the Cara Pharmacy Group. You might recognise this busy lady from her appearances as a Dragon on Dragons’ Den and the hit RTÉ series The Secret Millionaire. She joins HerFamily.ie to write a regular, honest column on the challenges of juggling it all.

There I sat with my four-day-old son balanced on my left arm in our Head Office, signing a cheque for a supplier with my right hand. A moment I remember so clearly. My husband (and co-director) could have done the signing, but I insisted. The actions of a sane mother? I'll leave that for you to answer.

When we decided, four years into our marriage and nine years in business, that it was time to take the leap into parenthood, (literally as we made our way down the aisle) nine months later I was pregnant, and 39 weeks later, I was handed our son.

In preparation for parenthood, I was adamant NOTHING was going to change in my life. I was still going to be the ambitious career woman I always was. We would still have our usual Friday night meals out. I wouldn’t be taking much of a maternity leave, and I would slip back into things immediately. Just because I was the person who had carried our son for nine months, didn't mean I couldn't return to work just as my husband planned to after our son was born.

What I know now is that I was trying to prove a point... and a pretty silly one at that. My issue was that just because I was a mother, why shouldn't I continue to work hard at our business just like my husband and father to our child could. What was the big deal?

I delivered our son into the world on a Sunday evening and when I returned home after what can only be described as a rocky couple of days, trying to breast feed, failing miserably and whatnot…. out came the laptop and I started to reply to emails as if nothing had happened. Clearly the epidural was still in my system. It all seemed wonderful.

Two weeks later I put on my work suit and went into the boardroom to interview candidates for a position within the company. I remember getting odd looks from men and comments were made to my husband about my early return to work, but I didn’t give a hoot. What did they know? I had a point to prove. 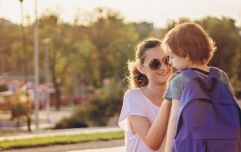 END_OF_DOCUMENT_TOKEN_TO_BE_REPLACED

Meanwhile, I had a child who was screaming fifteen hours a day since he was ten days old. Colic, I thought… how wrong was I. My child was suffering from a severe kidney infection from birth, which I did not pick up on until he was four months old after being told by my mother that something was seriously wrong. I was too busy proving a point.

To say I have regrets from this period of time in my life is an understatement and the guilt of attempting to prove that point haunted me for a long time.

No one can turn back the clock, but if I had a point to prove now, it would be this: why do we expect ourselves to be Wonder Woman? Nine months of physical, hormonal and emotional change, labour and the aftermath of that, the changes that a new baby brings to your home, never mind your sleep pattern and the never ending stream of visitors (all with good intentions!) calling and never having a full dinner again for two years... the word ‘holiday’ hardly comes to mind!

I look back on the journey that our son has been on over his five-and-a-half years and it's gone by in a flash. I don’t want the next five to go the same way. That time will never come around again. Even though I had a baby that was unwell, (and being entirely honest, work was the easy option) I completely regret my frame of mind at the time. I wish I had worked out a proper balance, where I could have been with what I am most grateful for in my life, while still maintaining my confidence and work ethic. And most importantly, giving myself the break I deserved with my son.


popular
Six stillbirths linked to Covid-19 in Irish hospitals
Lidl's hanging egg chair is coming back to stores this month
The ultimate gift for your Prosecco loving friend? Behold the prosecco scented candle
The Kivin method could help you get the best oral sex you've ever had
Princess Charlotte doesn't have to bow to the Queen but Prince George does - here's why
These 5 Foods Could Increase Your Chances of Having Twins
Low rise jeans are making a comeback and we're not ok with it
You may also like
3 years ago
Women are less likely to take a sick day from work, says study
3 years ago
Three ways to help bag that promotion you're after
4 years ago
Work/Life Balance – What's That?! Try These 10 Tips to Happiness
4 years ago
Returning to work after maternity leave: 9 tips to help you totally nail it
5 years ago
What It's Like To Be 'Mommy-tracked' When You Return to Work After Maternity Leave
5 years ago
Meet the Mumpreneur: Pilates Guru Naomh Kirwan
Next Page