"You left me one last gift, the gift of being a father."

A man who became a dad on the day his wife was killed has recreated their maternity shoot with their daughter one year later.

Yesenia Alvarez tragically died on August 11 last year after being struck by a drunk driver.

The baby girl she was eight months pregnant with was delivered to be raised by her dad, Yesenia's husband James.

"You left me one last gift, the gift of being a father," he wrote in a post shortly after his wife's death.

Little Adalyn spent her first few weeks of life in NICU fighting to stay alive until James was finally able to bring her home as a healthy baby.

For Adalyn's first birthday, James has recreated the couple's stunning pregnancy shoot in celebration of the mother who isn't here to celebrate with them.

"We did Adalyn's first birthday photoshoot in honor of my wife," James wrote in an Instagram post showing the shoot. "Today, marks one year of losing my wife but also having our beautiful daughter become one year old. We had Adalyn dress up in a pink dress as her mommy did and took pictures at the same location where we did our maternity shoot. 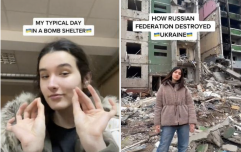 END_OF_DOCUMENT_TOKEN_TO_BE_REPLACED

"It’s been a tough journey but I did it with my head held high. I try to be the best father I could be for my daughter. I want to make my wife proud."

The pictures show the father-daughter duo mimic the poses and outfits of the original photoshoot in an adorable tribute.

In another post, James wrote: "The day you left, I lost a part of me but gained that piece back when we had our daughter.

"...I didn't set out to be a single father or widower. I set out to be the best father I could be… And it hasn't changed because giving up is not an option."

James regularly shares updates on their daughter and uses the tragic story of her birth to discourage people from ever driving under the influence of drugs or alcohol.

"My daughter gave me a new reason to continue fighting," he said. "[I'm] here standing strong and telling you to please don't drink and drive.

"With irresponsible actions can take someone's life and let me tell you, I wish this horrific pain upon no one. I lost my wife but most of all, my daughter will never know her mother. Please do the right thing and be responsible."


popular
Expectant mum says MIL wants her to 'hold off' giving birth until her renovations are done and what?
Ed Sheeran and his wife Cherry welcome their second child together
Mum reveals why you should never let your child sit on your lap on a slide
New mum devastated that her mother-in-law held her baby before she got to
Ryanair passenger refuses to swap seats with mum and baby- was she wrong?
Rebekah Vardy storms out of court just 30 minutes into final day
Here’s how to plan a family holiday without spending a fortune
You may also like
1 week ago
Loose Women presenter slams parents for letting kids use tablets in the car
2 weeks ago
I told my best friend her hubby made a pass at me and now she blames me, not him
2 weeks ago
Met Gala 2022: What happens inside the event and where do the funds go?
2 weeks ago
The internet calls this dad's reaction to viral TikTok gender reveal a 'big red flag
1 month ago
My mum left my child sleeping outside so she could have a coffee
1 month ago
My ex-husband still sleeps with our 8yo daughter in his bed
Next Page