Abbey Clancy has revealed her newborn son's name, and it's just perfect

The stunning Abbey Clancy and footballer, Peter Crouch, welcomed their fourth child into the world on June 3.

Up until now, the couple had joked the baby was called Divock Samrat, in tribute to Liverpool FC player.

Thankfully, that is not the tot's name.

In Peter's column for the Daily Mail, he revealed that he and Abbey have called their new son Jack.

"We have just welcomed our fourth child, Jack, into the family and the wonderful chaos that comes with a new baby means it hasn't really hit me that I haven't gone back for pre-season training. Life is hectic in a brilliant way."

Peter announced the birth of his fourth child via Twitter, joking about his new son's name. 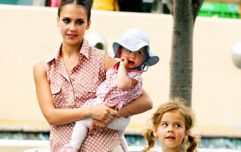 10 gorgeous celebrity baby names you will want to steal immediately

END_OF_DOCUMENT_TOKEN_TO_BE_REPLACED

Peter later added: "Our boy is beautiful the name is still to be clarified unfortunately Abs not going for Divock Samrat."

Speaking on the latest episode of That Peter Crouch Podcast, he said: "He might get bullied if his name is Divock. I had to actually come out and say his name isn't actually Divock Samrat - that was a gag."

"To me Divrock was a lovely name. Abs said to me, 'You've got to tweet it, it's brilliant'."

However, the couple have decided on Jack Crouch, and we don't blame them.


popular
"Just take the picture" – one dad shares beautiful reminder to capture mum in pictures
The €15 Dunnes Stores top that we're totally obsessed with at the moment
Prince William and Kate Middleton 'planning a trip to Ireland' in spring
Mum shares powerful open letter to the plane passenger annoyed by her crying toddler
Groom calls his fiancée a 'toddler throwing a tantrum over a sparkly toy' for not wanting to buy a €90 wedding dress
Kate Middleton reveals that Prince William doesn't want any more children
Emmerdale 'confirm' when Graham Foster's killer will be revealed
You may also like
2 months ago
Shay Mitchell has revealed her daughter's name for the first time, and it's so unique
2 months ago
2019 is coming to an end and here are the 10 best celebrity baby names this year
3 months ago
Natalie Imbruglia has welcomed her first child, and his name is just adorable
3 months ago
Cecelia Ahern welcomed a baby girl over the weekend, and her name is very unusual
9 months ago
11 celeb baby names that are actually really nice (and not too crazy)
1 year ago
The bizarre baby names that became popular amongst parents in 2018
Next Page