Hospitals in America have begun using clear drapes during C-sections in an effort to help those giving birth feel more included.

Thanks to the new clear plastic drapes, birthing people will now be able to see their babies emerge.

With a regular C-section, surgical drapes are hung to ensure everything is completely sterile and to conceal the work the surgeons are doing which, let's face it, is not for the faint hearted. It does mean however, that you have no idea what's going on until your baby is lifted close to you.

Having had a C-section, I was more than happy to hang out behind the drape while the doctors did their thing, but I can absolutely see the appeal of a clear drape. 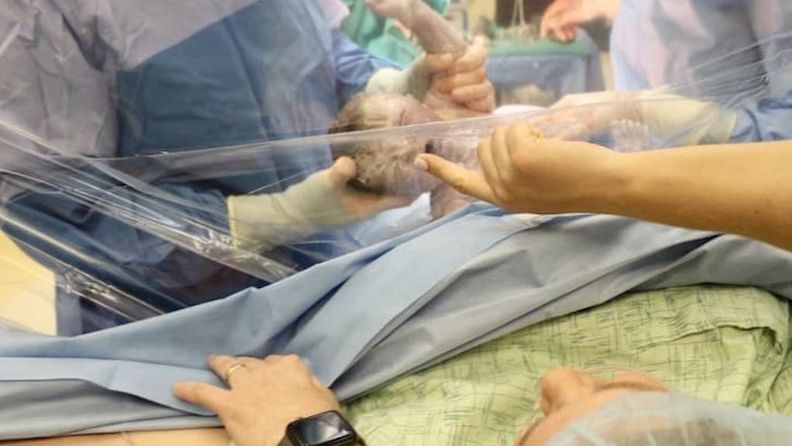 The method was introduced as part of the new wave of 'gentle caesarean' births, where music is often played and the baby is placed down for skin to skin immediately afterwards, like they would be during a vaginal birth.

Doula and photographer Tracy Abney, who captured these photos said she is glad that mothers are no longer missing out on the full birthing experience;

"I loved being able to watch my clients as THEY were able to watch their baby being born. They participated in the birth, and were able to witness the moment their son took his first breath. It was such a sweet experience and such a beautiful birth."

We'd love to see hospitals in Ireland offer this as an option during C-sections, particularly as we have one of the highest rates of births via caesarean.

What do you think? Would you like the option of a clear drape c-section?


popular
Brother of Amber Gibson charged in connection with her death
Here are the final post dates for Christmas 2021
Father and girlfriend found guilty over death of 6-year-old Arthur Labinjo-Hughes
"She is too young": Kourtney Kardashian mum-shamed over daughter's latest TikTok
My father-in-law revealed I suffered a miscarriage on Facebook- how will I ever forgive him?
"He was my best friend": Mother of Arthur Labinjo-Hughes pays tribute to her son
Tánaiste Leo Varadkar reassures kids that Santa will visit Ireland this Christmas
You may also like
4 days ago
New Zealand politician cycles to the hospital to give birth – AGAIN
1 week ago
Irish woman gives birth to baby in taxi while on holidays in Lanzarote
1 month ago
Mum gives birth to 14lbs 15oz baby believed to be UK's 3rd biggest on record
1 month ago
Big bundle of joy: woman gives birth to baby weighing over 14lbs
2 months ago
Midwife says making women give birth on their backs is "putting them through torture"
2 months ago
Babies born in October are pretty special – and science even says so
Next Page