Camilla was not happy.

Queen Consort Camilla was not impressed with her step-grandchildren's 'antics' at Queen Elizabeth's funeral.

Prince George and Princess Charlotte attended their great-grandmother's funeral on Monday. It looked like the brother and sister were on their best behaviour, but the Queen Consort was spotted giving out to the pair.

According to the Daily Star, Camilla spotted the siblings bickering before the funeral started.

Princess Charlotte then turned around, stared at her brother, and said "Ow".

Camilla frowned at the siblings and turned to the Princess of Wales and said, "Take her."

Meghan Markle reportedly smiled at Princess Charlotte after the incident.

Viewers couldn't help but comment on the awkward moment. 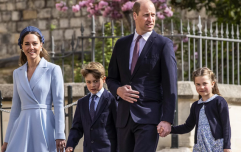 END_OF_DOCUMENT_TOKEN_TO_BE_REPLACED

One said, "Poor Charlette- Her (wicked) step-grandmother Camilla is one I have never liked at all.

Another added, "She's not the warm, loving Granny Elizabeth was."

Another shared, "George pinched Charlotte and Camilla told Kate to take her daughter when Charlotte said "ow". Meghan smiled at the children as they played. They are 7 and 9. They are children and except for that one moment they were wonderful the entire time."

One said to give the Queen Consort the benefit of the doubt as it was an emotional day for the family.

Prince George and Princess Charlotte joined their dad, Prince William and their mum, the Princess of Wales at the Queen's funeral.

During the ceremony, Princess Charlotte was spotted smiling at her uncle Prince Harry.

popular
Breaking: Female child found with severe injuries in Co. Clare
Fans defend Khloe Kardashian for posing in hospital bed with her newborn
Girl found injured in Co. Clare house is in critical condition
Extra child benefit, IVF and free GP care: Key takeaways from Budget 2023
Budget 2023: IVF to be publicly funded and free contraception for under 30s
School threatens to suspend pupils who don't follow "outdated" uniform rules
Vaccine programme to roll out in primary schools
You may also like
1 month ago
William and Kate send letter to girl who invited Prince George to his birthday
1 month ago
Here's how much Prince George and Princess Charlotte's new school costs
2 months ago
Revealed: The cheeky nickname Prince George's classmates use for him in school
2 months ago
Prince William and Kate 'won't spoil' George for his birthday
2 months ago
William and Kate share adorable new birthday portrait of Prince George
2 months ago
Kate made Prince George wear suit to Wimbledon to 'prepare him for future as king'
Next Page