Expert says that punishing your kids will not change their behaviour

Super Nanny Jo Frost famously made 'time out' the go-to punishment of choice for parents around the globe, but now researchers have deemed this – and other methods of behaviour correcting frequently used – completely and utterly pointless.

Oh, and don't think that just yelling at them when they act up or does something wrong is better – it is not.

In fact, according to a new study, motivation through punishment does not get your children to listen, and can actually end up doing more harm than good.

In a study involving electro-convulsive therapy, Professor Andreas Eder and his team encouraged the adult participants to complete a simple task after learning they would receive a slightly painful electric shock when pressing one of the two keys. When a number flashed up on a screen, they were asked to determine whether the number was greater than or lesser than five and communicate their decision by hitting the appropriate key.

Sounds simple enough. However, when participants hit the wrong key, they got zapped. Now, why would anyone deliberately do such a thing?

The researchers wondered the same thing and expected participants to press the key more slowly after learning of the electrifying consequences. But, it turns out, they were wrong. Not only did participants push the pain-inducing key, they did so more quickly than before because they wanted to get it over with due to (scientists assumed) heightened arousal. 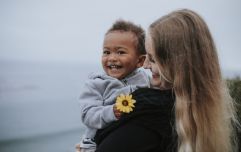 END_OF_DOCUMENT_TOKEN_TO_BE_REPLACED

What this mean? Well, the researchers theorised that put simply, punishment alone does not stop undesirable behaviour. If anything, it may have the reverse effect, which is why some kids will voluntarily "put themselves in timeout" whenever they do something wrong.

And while this study was indeed conducted on willing adults, there is no denying the findings are also of interest to parents of young (and older) children.

So what do to if you can't punish them for behaving badly? Well, how about taking a deep breath and explain why this or that is wrong or bad, and offer a clear alternative or solution – emphasising that you know they have the knowledge and power to chose differently (better) the next time?


popular
The €15 Dunnes Stores top that we're totally obsessed with at the moment
Kate Middleton reveals that Prince William doesn't want any more children
People are really not liking the outfit that Holly Willoughby wore this morning
Kate Middleton is wearing a sold-out €16 Zara dress today and we just LOVE it
32 beautiful baby names from around the world
14 short and sweet baby names which prove that one syllable is enough
Mum shares her hack for cleaning ball pit balls and it's such a time-saver
You may also like
1 day ago
Are we concentrating too much on being friends with our children?
1 day ago
Mum shares powerful open letter to the plane passenger annoyed by her crying toddler
1 day ago
There is a perfect way to keep on top of your family's laundry, says this organisation expert
1 day ago
You should do this straight away if your toddler starts to hit
2 days ago
The 1st year: 4 tips to TRY to help your baby to sleep through the night
3 days ago
Nursery school teacher shares trick to make your children's playdates run like clockwork
Next Page