Katie Price is usually in the headlines because she is being criticised, but this week she was being praised for sharing the below snap of her 2-year-old son Jett.

Alongside the photograph, which was uploaded on Tuesday, the mum-of-five wrote: “Jett loves dressing himself.”

In the picture, the toddler can be seen wearing mismatched wellies and holding a Louis Vuitton handbag.

One fan wrote: “Beautiful little boy with a big personality lol bless him.” Another said: “Love the way you allow your children just to be them credit to you.” 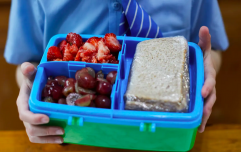 END_OF_DOCUMENT_TOKEN_TO_BE_REPLACED

Some referred to the fact that Katie usually attracts negative comments, with one noting: “Suppose she'll get stick for letting her son hold a handbag! Lol”.

Katie has previously been criticised for allowing her 8-year-old daughter, Princess, to wear makeup.

One of the team recently discussed the decision to share photographs of her kids online. You can check out the piece HERE and don't forget to let us know your thoughts!

popular
Adam Collard responds to claims he cheated on Paige Thorne
Childcare fees to be reduced by up to €170 per month
Vicky Phelan speaks about how she dealt with the trauma of her daughter's accident
Holly and Phillip weren't on media list for Queen's lying in state
Budget 2023: Parents will not have to pay for primary school books from next year
Coco Austin comes under fire for bathing daughter (6) in sink
Paralympian Ellie Simmonds targeted by online abuse after Strictly performance
You may also like
3 days ago
TV presenter praises royal children – and claims most parents today are raising 'spoiled brats'
1 week ago
Positive parenting: 5 signs you are doing a great job as a parent
1 week ago
Some things definitely 'not' to do if you've been up all night with the baby
1 week ago
The Terrible Twos: One mum's advice on coping with this big parenting milestone
2 weeks ago
I am a tween mum now – and here is what I have learned so far
2 weeks ago
How to get your child to behave - without time-outs, shouting or bribery
Next Page