Give it a go! The November tradition that young children will find magical

Most of us are familiar with the Elf on the Shelf tradition – you know that little Pinocchio-looking elf that gets up to all sorts while the children are nestles safe in their beds around Christmas time?

But you might not have heard of the November equivalent yet, though?

One night in 2012, parents Refe and Susan Tuma from Kansas City decided to have some fun with their children's toy dinosaurs, posing them to make it look like they were coming to life at night when they family slept. Little did they know that their late-night creative endeavors would not only spark a now much-loved a family tradition, but also a global internet craze. 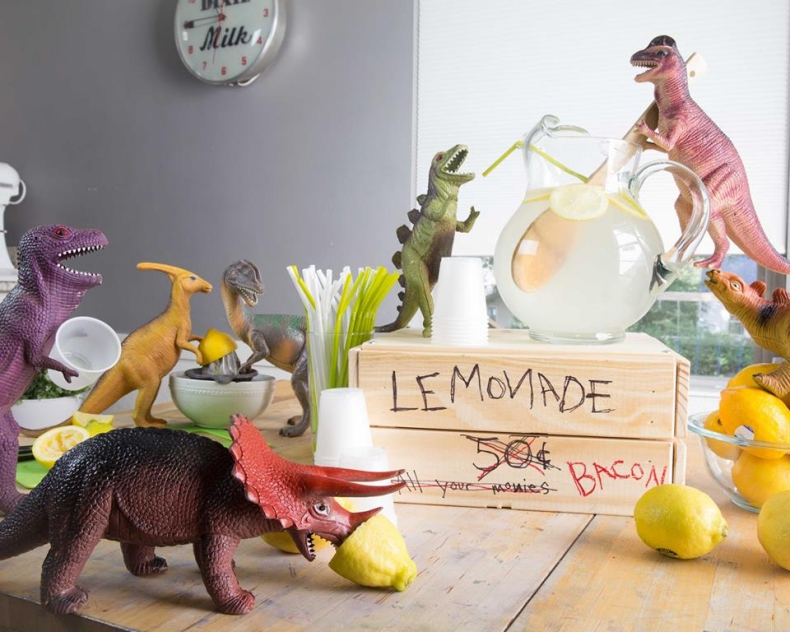 "We initially did it as a way to try and get the kids to sleep through the night," Refe explains to the Huffington Post. "We had three young children, and were totally sleep deprived ourselves."

With the promise of seeing what the dinosaurs had been up to the next morning the children slept through the night, looking forward to their morning surprise.

"It began modestly enough," Refe explains. "The kids woke up to discover that the dinosaurs had gotten into a box of cereal and made a mess on the kitchen table."

The next morning, though, the dinos had climbed onto the kitchen counter and raided the fruit bowl.

"The morning after that, they had managed to breach the fridge door and help themselves to a cartoon of eggs. 'Uh-oh,' we heard the girls whisper. 'Mom and dad are not going to like this.'"

The father-of-four explains that things escalated from there. "More often than not, the dinos' antics were less than tidy. They are dinosaurs after all." 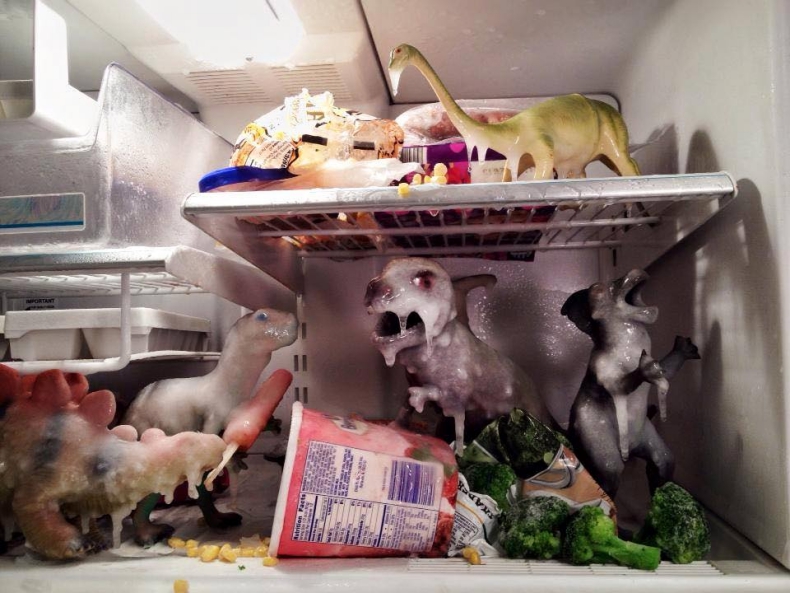 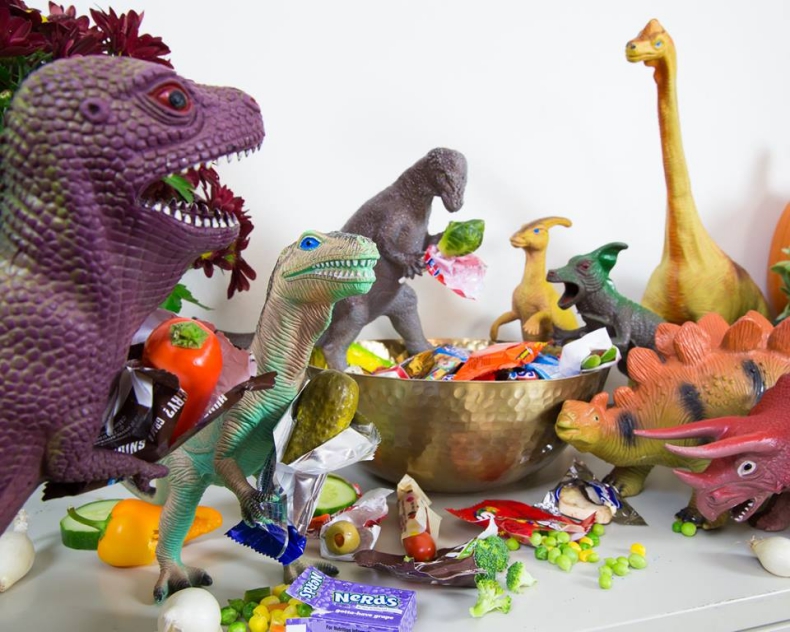 The mischief the dinosaurs have so far 'caused' includes, painting graffiti on the walls, unraveling the toilet paper in the bathroom and breaking eggs all over the family's kitchen floor. Oh, and interrogating a Ninja Turtle toy. To name a few.

After sharing the idea with friends and family – and seeing how much their kids loved it – the couple decided to set up a Dinovember Facebook page, to share their idea with other users around the world.

Refe explains: "At first it was a way to show our family what we were doing for the kids and everybody loved it. They were talking about it for months afterwards."

The group is already followed by more than 280,000 people – many of whom have been inspired to make their own dinosaur scenes. 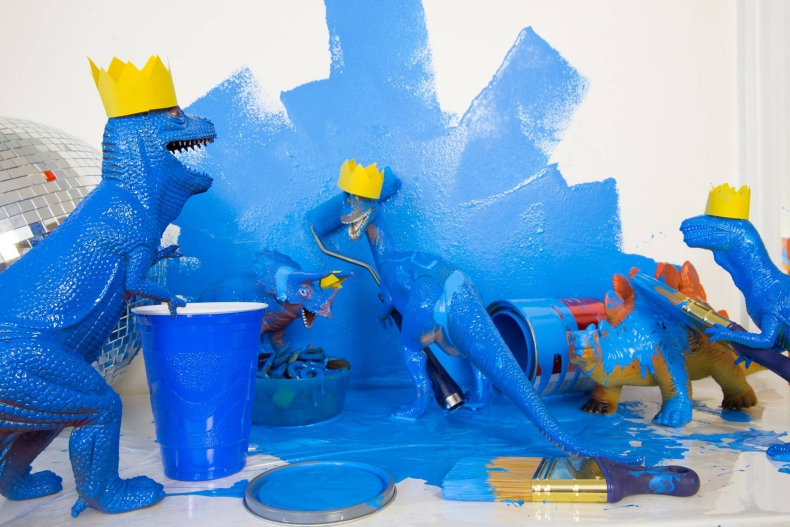 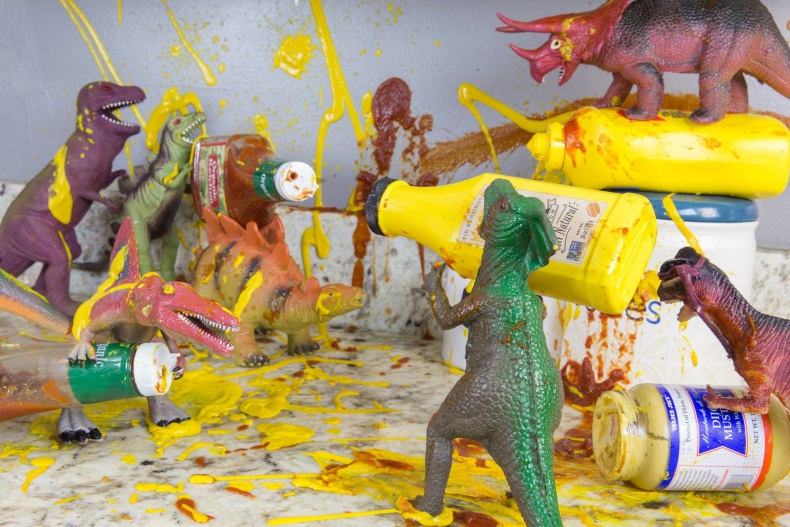 On why they are doing it, the creative dad explains: "Because in the age of iPads and Netflix, we don't want our kids to lose their sense of wonder and imagination. In a time when the answers to all the world's questions are a web-search away, we want our kids to experience a little mystery. All it takes is some time and energy, creativity and a few plastic dinosaurs. Childhood is fleeting, so let's make it fun while it lasts."

Tell us, what do YOU think about this idea? Would YOUR kids love it if their toys came to life at night? Is this something you would consider doing? Join in the conversation with us on Twitter at @HerFamilydotie


popular
Opinion: All schools should have generic school uniforms
Here's where you can get the best deals on all your Back to School essentials
Ekin-Su and Davide taking their mums to New York with Love Island winnings
Baby twins die in hot car after dad forgets to drop them to creche
Luca and Gemma to take major step in their relationship
A mum's experience of being made redundant... while 7 months pregnant
Five teenage girls rushed to hospital after crash in Kilkenny
You may also like
4 days ago
How soon is too soon to leave your new baby for the first time?
1 week ago
If you could have a "parenting do-over", what would you change?
1 week ago
These are things police officers wish you’d teach your kids to keep them safe
2 weeks ago
I tried a viral 5-second trick that promised to make me a happier, calmer parent
3 weeks ago
I kicked my daughter's friend out of her birthday party- was I wrong?
3 weeks ago
Mums are sleep deprived for six years after having a baby – and yet dads are not
Next Page