Is THIS The secret To Raising ‘Can-do’ Children?

If the very thought of the draconian tiger mother hot-housing her offspring with endless hours of piano practice breaks you out in a cold sweat, you might never have considered the benefits of goal-setting for kids.

While striving to raise a mini-Einstein might not be your thing, there is research to suggest that when kids are supported in setting and achieving simple goals, they develop great habits like resilience, perseverance and optimism. Here’s what you can do to help foster a ‘can-do’ attitude:

Okay, so tennis prodigies like Serena Williams might have been cultivating their high-velocity forehand before they even started school, but the general rule is to ensure goals are suited to the age and stage a child is at.

From age two until seven, kids still don’t have a firm grip on logic, so cause and effect (e.g. practice leads to improvement) doesn’t mean very much. Curiosity (the ‘but why?’ phase) is a big motivator though, and simple goals like learning the names of all of the planets in the solar system – or the constellation of Marvel superheroes – are likely to engage them.

Bigger goals work for those aged seven and older and things like saving pocket money can be linked to the growing sense of independence that kids in this age range feel.

2. Work out the pathway

Even little goals can feel huge to smallies. That can trigger a sense of intimidation and the desire to give up with the going gets tough. The trick is to sit down and brainstorm, so that the child gets practice in breaking down a big goal into smaller milestones. Get creative. Once three or four steps are figured out, children can draw pictures of each stage. Older children can be encouraged to make a ‘goal map’ to plot their way from start to finish.

This kind of ‘stepping’ increases kid’s confidence in reaching the goal. It’s also a great antidote to the common, but mistaken, belief that goals can be accomplished all at once. The procrastination and anxiety associated with the myth of ‘overnight success’ can be diffused easily when kids realise that goals are reached bit-by-bit. 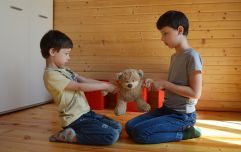 How to help kids resolve rows by themselves

END_OF_DOCUMENT_TOKEN_TO_BE_REPLACED

As the child completes each of the steps towards their goal, support and recognise their effort. This could involve putting a gold star at key points on their ‘goal map’ or a small healthy treat to mark the achievement.

When the going gets tough, help your child to persevere by chatting about how much work they’ve done and what they still need to do. Children often lack the ability to gain perspective on challenges and sticking to a goal can feel like an impossible task without encouragement. At this point, you may need to brainstorm again to help figure out what obstacles might be getting in the way of the goal. If your child is getting downhearted, remind them of the strengths and skills they’ve used to get this far and let them know that they have resources to draw on in the future.

Brainstorm alternative ways to reach a goal if your child is finding that their first approach isn’t working. Having a number of routes or options for achieving something builds hope and resilience in the face of obstacles. Getting the child to list out as many options as they can (even if some of these are not necessarily the most realistic) is a great way to develop strong problem-solving skills.

Sometimes achieving a goal might mean picking up some new skills along the way. Here’s where role play can be really useful. Younger children will really enjoy it and evidence shows that rehearsal of real-world situations boosts confidence and resilience. If the goal is to make more friends at school, for example, you could take 10 to 15 minutes where you role play the process of approaching another child in the playground. Swap the roles around and work through situations where the response is negative as well as positive. This means the child is better prepared to handle it when things don’t go to the original plan.

7. Learn along the way

Whatever the outcome, working towards a goal is a great learning opportunity. If things don’t work out, encourage your child to learn from that setback. Blaming or personalisation should be discouraged, but it can be useful to identify things that might have contributed to a negative outcome and plan how these might be avoided in the future.

Rewarding success might seem self-explanatory, but you can help your child to get more from their achievement by actively taking time to reflect on the skills and strategies that worked for them and how they might use them again in the future.


popular
A mini heatwave could be coming our way in September
Gardaí begin nationwide search for missing teenage girls Charli & Ruby McGlynn
Here's where you can find school uniforms that will stand the test of time
Mum issues warning to parents over frightening Cocomelon video
Mum charged with murder after allegedly leaving baby in hot car
Vogue Williams slams man who refused to swap seats with her on plane
Expert says Cocomelon acts "as a drug" to kids' brains
You may also like
3 years ago
10 easy (and sweet) ways that you can help children believe in themselves
4 years ago
Nab a chance to play at the All-Ireland Camogie Final and WIN €7,000!
5 years ago
Kate Middleton admits she is not the perfect parent (and we love her for it)
5 years ago
These Tricks Will Help Your Kids Grow Into Confident, Competent Adults
6 years ago
This Comedian Says Women Need To Upgrade Themselves (And She's Right!)
6 years ago
5 Ways To Immediately Boost Your Body Confidence
Next Page