When I found out I was pregnant with my first baby, I knew next to nothing about birth. The small amount I did know came mostly from TV – waters breaking in a big gush at a climactic moment in the film, labour that always seemed excruciating, and newborns that look three months old. I knew that there was something called an epidural that would take pain away, and assumed only truly insane people would say no to the drugs.

And of course, when you’re five weeks pregnant and not telling anyone, it can be hard to get good information and advice too. I eventually muddled my through booking in with a maternity hospital and opted for combined care whereby every second appointment was with my GP. From that point on, I followed medical staff lead on almost everything.

Looking back, nine years and three children later, I wonder why I didn’t do more research and how I didn’t know there were other options open to me. My three births were fine in that nothing terrible happened, but I saw them as something to endure rather than something to enjoy.

Is it really possible to enjoy birth? And what prompts people to choose different types of births?

When Eimear Hearne was expecting her third baby, she looked into having a water birth, but only told her husband on the day she went into labour.

“I really did very little preparation. I read the leaflet that the Coombe had given me, and I read some information online about the pros, cons and risks of a water birth. My baby was born at 37 weeks and one day, so he was early and unexpected, and I hadn’t had a chance to give it much thought at all. I was still working, and looking after a four-year-old and a nearly two-year-old. I should probably note, however, that I did do active birth preparation for my first baby and knew from the get-go that I wanted to avoid births in which I was stuck lying in a bed on my back because of an epidural.”

Eimear just about met the criteria for a water birth – women must be between 37 and 42 weeks pregnant. There was also just one birthing pool, which she knew might not be free, and she had been told that it could only go ahead if a clinical specialist was available.

“When I got into the pool my midwife told me that she wasn’t trained to attend a pool birth and that I could only use it for labour. I expressed an interest in staying in the pool for the birth so she said she would see what she could do. Very luckily for me, there was a clinical specialist available at short notice. On arrival, the clinical specialist explained what would happen if I stayed in the pool for the birth, as there are elements of it that differ from a standard birth. It was very important that the baby was delivered completely submerged in water and that the midwives would not touch the baby until the entire body was delivered into the water, to ensure that he would not take a breath prematurely –contact with air or handling apparently results in a natural reflex in the baby to start breathing.”

Eimear compares her water birth with her previous experience of feeling immobile during labour. “I felt so light and mobile, and it was really easy to get comfortable and to change positions when and if I needed to. My established labour was also very quick. The lights were dimmed, and I was able to use 'gas and air' in the pool. It was all very calm, and I felt relaxed. The pool was like a big bath, and I lay with my head at the top of it on a warm towel. After the baby was born everything remained very calm, the lights stayed low, and I was helped out of the pool and onto a made-up bed on the floor so that I didn’t have to climb into a high bed. I was probably on a bit of a high – I couldn’t believe that I have actually given birth in water and that it all happened so quickly and easily.” And how would she sum it up? “Having a pool birth was a truly positive experience for me, and I feel very privileged to have had the opportunity to give birth in water. I would highly recommend it to anyone thinking of it and hope that it will become a more mainstream option in all the hospitals in Ireland in the future.”

Kim Brophy had a natural birth at the Midwifery Led Unit in Our Lady of Lourdes in Drogheda. So what led her to forgo the epidural?

“It was my first baby and as soon as I started to think about the birth I just wondered if I'd be able to get through a natural birth. It was never something that was overly important to me before I found out I was pregnant but as soon as I started to think about the little person in there I decided I'd like to try and give them as gentle a transition into the world as possible! Nearly all of my friends and colleagues highly recommended the epidural, so it didn't give me much confidence but I couldn't help think about our parents years ago; my mum had five natural births and my husband’s mum had eight, so I decided to do a bit of research online and stumbled across Gentlebirth." 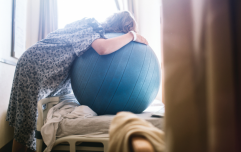 END_OF_DOCUMENT_TOKEN_TO_BE_REPLACED

Kim says she was a little skeptical at first. “It seemed a little ‘new age’ and too good to be true, but the testimonials couldn't be ignored! All of these women had amazing positive births and a lot of them in quite a quick amount of time. The more I read, the more I loved the idea. It's a mixture of mindfulness, hypnosis, positive affirmations and being as knowledgeable about your labour as possible, so you feel calm and in control.”

So the big question – did it work? “I had such an amazing first birth experience. It was in no way painless but totally manageable. I laboured at home until I was 9cm dilated and our baby was born 45 minutes after we arrived at the hospital. I definitely had a couple of wobbles along the way, but I had the tools from Gentlebirth to keep myself as calm as possible. For anyone who's interested in having a more relaxed approach I'd definitely recommend downloading the app or doing a workshop.”

Bernie Creaner-Burke had a homebirth, but it wasn’t exactly planned.

“I had planned to give birth in the Rotunda, but Olivia arrived in a big rush!  It was the easiest and the best experience of my life; I was completely blown away by how instinctive it was and how powerful our bodies are.  And the confidence I had in my body and my baby, it was quite a turn around for me.” Like Kim, Bernie had discovered Gentlebirth and felt it was a huge help to her for her unplanned homebirth. “When I had my first son I was completely terrified of birth and hospitals in general, the whole pregnancy I was swinging between being really excited to meet my baby and pure terror about giving birth. When I was thinking about having another I decided it was not going to be that way. I heard about Gentlebirth it made total sense to me.  I'm a big believer in the mind-body connection and that by relaxing your body you can reduce fear, tension, and pain in labour. I loved that Gentlebirth was suitable for any kind of birth and using pain relief could still be part of your plans. I wasn't ruling out the epidural I just wanted to remove the fear.”

Bernie went on to teach Gentlebirth workshops herself and has since trained as a Doula (blissfulbumpsnbabes.ie).

Her one regret is an unusual one: “It might sound a bit mad, but the only downside to my birth was it was too short – about one and half hours – we didn't get a chance to use the bath or massage oils and all tools we had prepared with!” Uncommon indeed, but an enviable regret all the same, and perhaps better than anything else, it sums up the difference between enduring or enjoying childbirth. 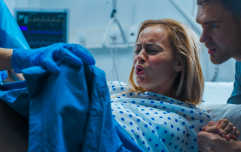 Men should never watch a woman give birth, doctor argues

END_OF_DOCUMENT_TOKEN_TO_BE_REPLACED

popular
Dunnes Stores launches stunning collection of Communion dresses
Siblings kidnapped in March 2022 have been found alive
Emma Pattison: Tributes paid following death of head teacher and her family
Adam Levine reveals gender of his and wife Behati Prinsloo's baby
Barista slated after they refused a pregnant woman caffeine
Murderer Daniel Murtagh scarred for life following Midlands Prison attack
Stacey Solomon hints at baby girl's name as due date nears
You may also like
1 week ago
Mum wants her eldest child to be there when she gives birth
2 weeks ago
Woman gives birth to baby weighing a huge 16lbs
2 weeks ago
Best friends find out they're pregnant on the same day and give birth an hour apart
1 month ago
Babies born in January are more likely to become rich and famous
2 months ago
Hollyoaks star Jorgie Porter has welcomed a baby boy
3 months ago
Khloe Kardashian says she is officially "done" with having kids
Next Page